Driving under the influence is never OK. Every driver in America knows how wrong it is – we’ve been conditioned by the many driver’s education courses preaching the dangers of drinking and driving and the ample commercials warning of the same.

Yet, drivers in the United States continue to get behind the wheel after drinking. According to government data, 4 million drivers report driving under the influence of alcohol, actions that have resulted in over 13,000 deaths annually, as well as over 1.4 million DUI arrests every year.

Given the seriousness of the offense and the danger that drinking and driving pose to yourself and others, it makes sense that the penalties associated with a DUI arrest are severe and costly. Beyond potential jail time and driving restrictions, states have made the fines and other financial costs that come with such an arrest expensive, even for first-time offenders.

To illustrate just how seriously a DUI arrest can impact the wallets of people across the country, we decided to collect data on a few key costs that are consistently enforced across the country and then share those results. It should be noted that these costs are severe, but also that they only represent the amount someone arrested for their first DUI offense can expect to pay, while repeat offenders face substantially larger financial impacts.

The minimum cost of a first-time DUI by state

To compile our list, we focused on a few key financial penalties that are consistent across almost all states. This led our research to focus on fines, license reinstatement fees, the costs for court-mandated ignition interlock devices (a breathalyzer connected to someone’s car that prevents the vehicle from starting if alcohol is present), and the costs for court-mandated safety courses covering driver education and substance abuse.

Those first two costs are applied on some level in every DUI case across the country, as fines and driver’s license suspensions go along with potential jail time faced by all DUI offenders. The other two costs differ from state to state, although one or both are frequently levied against people who drink and drive throughout the country.

Having arrived at our criteria for this study, we found both minimum and maximum monetary costs associated with DUI cases in every state. We used official state sentencing guidelines, DMV listings of license reinstatement fees, and cost estimates from ignition interlock companies, law offices local to different states, and driver education and substance abuse classes that have been approved by state governments to collect our cost data.

When it comes to the minimum amount a driver can expect to pay for a DUI arrest, the national average $1,459, while South Dakotans face the steepest costs at over $4,000 dollars thanks to hefty fines and expensive court-ordered education courses. On the flip side, the cost for driving drunk in Wyoming can be shockingly lax, with a $50 license reinstatement fee potentially being the only monetary cost drivers may have to deal with, despite the fact that Wyoming has the highest rate of drunk driving deaths per 100,000 people in the country.

The maximum cost of a first-time DUI by state

Most states have a defined range that DUI fines can fall between, and our first graphic focused on just the minimum amount a judge can charge and offender. We also looked at the maximum fine amounts and combined those numbers with our other metrics to find the maximum court-ordered costs for a DUI in every state.

The average maximum cost for driving under the influence is $2,265, with drivers in four states-Indiana, Massachusetts, Oregon, and Washington – potentially being made to pay more than twice that amount for such an arrest. In fact, Oregon’s maximum costs for a DUI approach a number nearly three times higher than average at $7,325. Alternatively, both North and South Carolina fine drivers the same amount for a first-time DUI no matter the circumstances, and as a result, the maximum court-mandated costs for DUI arrests in both of those states are $500 or less.

The average insurance premium increase after a DUI by state 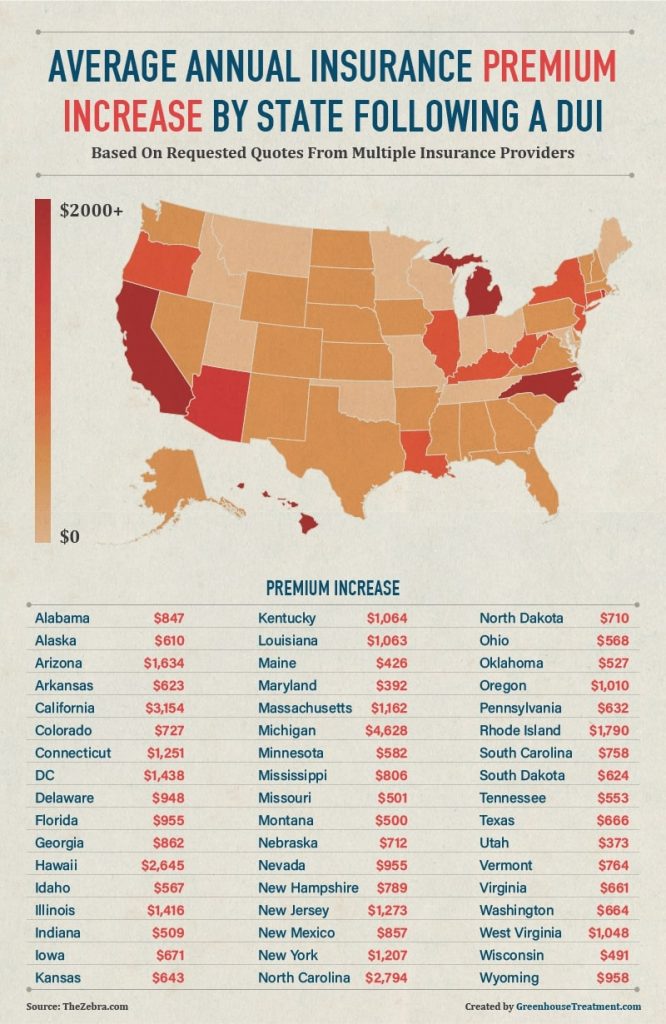 In addition to the criteria we examined above, we decided to look at one non-court-ordered cost that comes along with a DUI arrest across the country: insurance premium increases. Driving under the influence is risky behavior, and getting arrested for it should and does have a dramatic impact on how much you pay for car insurance.

The Zebra is a site that allows users to compare car insurance quotes and better educate themselves about the ins and outs of car insurance. They also conducted their own research into how much a DUI arrest can inflate your premium costs, which they found by obtaining estimates from multiple providers and then averaging the costs for people with and without a DUI.

Using their research, we were able to map out the states where drivers can expect their insurance costs to jump the most and least following a DUI across the country. In this regard, citizens of Michigan face the steepest increase, followed by California and North Carolina. That last state is particularly noteworthy given that the average insurance increase is nearly 6.5 times higher than the maximum court-ordered costs for a first-time DUI. In terms of the smallest insurance hikes, drivers in Maryland and Utah can expect to see their annual costs rise by less than $400, a fraction of the increase people some states face.

Even beyond the threat of monetary costs, the danger to yourself and others should be more than enough motivation to prevent people from drinking and driving, and we always encourage everyone to utilize a designated driver, rideshare driver, or other safe forms of transportation after drinking. Unfortunately, that message does not click with many drivers around the country, making DUIs a very real problem. For anyone struggling with addiction, whether they have gotten behind the wheel under the influence or not, we encourage you to find help and avoid the financial, legal, and personal costs of addiction. And for residents of Texas looking for that kind of resource, Greenhouse Treatment is here to help.