No One Is Immune: Houston City Councilman Dies of Drug Overdose 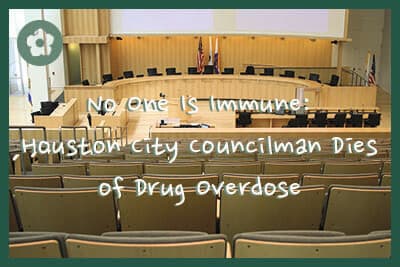 When City Councilman Larry Green died unexpectedly of an overdose last month, his coworkers, his family, and the people he served attempted to make sense of it. A former attorney, he also worked in government affairs and development, became a CEO, and then became a council member of the Houston City Council in January 2012, serving for more than six years before his death. At 52 years old and respected in his field, he was the last person anyone might expect to lose his life to a drug overdose.

The autopsy results revealed that a combination of methamphetamine and a solvent used as an inhalant called chloroethane caused Green’s death. It was an unexpected finding to most people, yet it is in moments like this that a clear lesson emerges: Drug use and addiction have nothing to do with character. An advocate for women-owned and minority-owned businesses in his district, Green lobbied hard for his constituents and had a positive impact on so many lives. He also died of a drug overdose. It is possible to struggle with substance abuse and also be a good person who works hard for the betterment of community and enhances the lives of others.

Brandi Harleaux is the chief operations officer for South Post Oak Recycling Center. She says that Councilman Green made changes during his tenure that helped to expand opportunities for her family’s business. She says: “There’s a lot of people who represent themselves, but he was very much about the community, the economy and about having economic development as well as touching people and touching businesses and everyone.”

Councilman Green’s family released a statement saying that the manner of his death did nothing to change that he was a “wonderful, caring person and a dedicated public servant.” And they are absolutely right. Though many might judge Councilman Green for the way he passed, most are finally beginning to see through his life and example that drug use and addiction as well as death due to overdose do not define a person or diminish the impact of their life. People take risks. Accidents happen. But they can also deeply and positively impact many of the people in their lives. When one of their choices results in addiction or death, it does not negate all the other choices they made that illuminated the lives of people around them.

No One Is Immune

When there is no stigma of drug use or addiction clouding the issue, we can clearly see the truth: No one is immune from the consequences of drug and/or alcohol use, whether it’s an occasional problem or a chronic condition. It does not matter how successful you are, what a good heart you have, or how much you give back to the community – drug use can end your life in an instant.

For families living with a loved one in addiction in Councilman Green’s district and across the state, his passing is a wakeup call. Every day that overdose does not occur is a gift and an opportunity to connect with the treatment that can help to turn things around.

Said Mayor Silvestor Turner: “Larry Green served honorably as a Houston city councilman. He fought to improve the community and open the doors of opportunity for people who shared his vision for equality, economic opportunity and safe neighborhoods.

“The autopsy results do not diminish the great work he did for the people of District K. However, it does remind us that our actions have consequences.”

“I hope everyone will continue to celebrate his life instead of focusing on his death. I was not aware of any substance abuse issues Councilman Green may have struggled with in his personal life. At City Hall, he was a leader and focused on serving his district.”

If you are aware of a loved one struggling with drug use or living with an active addiction, you have the opportunity to help them connect with treatment today. For some, it is as simple as presenting the option of recovery. For others, it may mean a formal intervention staged with the goal of helping your loved one to recognize that they are in crisis and treatment is needed now.

What steps can you take today to help your loved one move closer to treatment and recovery?