The 1960’s were an icon an icon of American cultural history. John F. Kennedy had just taken office and with his cabinet, referred to as Camelot, was promising to usher in a new era. Everyone just loved Jackie Kennedy and every lady wanted to dress like her. The Beatles owned the radiowaves and Spider-Man was making his entrance into the comic book world. The miniskirt and bell bottoms became the fashion craze. And, a little over a hundred years ago, we landed a man on the moon. 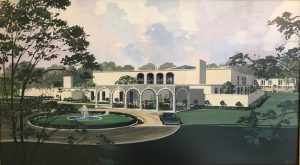 In the midst of this golden age in American history, Greenhouse was built. Centrally located between Dallas and Fort Worth, Texas, the Neiman Marcus company wanted to create an elite spa and resort experience for high rolling shoppers of their downtown Dallas flagship location. This hidden luxury gem had it all—from private executive chefs, to massage therapists, gentle exercise and tennis courts and even an indoor pool housed in an expansive atrium. The Neiman Marcus spa experience was like no other.

It’s even rumored that celebrities would often make it their escape from public eye. It’s said that famous best girlfriends Oprah Winfrey and Gayle King use to enjoy an escape at this Neiman Marcus spa.

Unfortunately, in 2001, the business began to take a turn for the worse, and the beautiful spa saw less and less of their high paying clientele. Eventually, in 2006, the building went up for auction. In 2008, the facility was procured by American Addiction Centers, who intended to use it for a different kind of therapeutic experience.

Designers of Greenhouse ensured the original design was kept: the sweeping Atrium, the indoor pool, the original marble floors, and the Executive Chef, Leo Gonzalez, who seamlessly transitioned his menu from spa snacks to therapeutic nutrition. Greenhouse Treatment Center offers 130 beds in an environment focused on holistic, end-to-end healing, wrapped in the level of service you may find at your favorite hotel.

If you are looking to experience treatment from addiction in a serene atmosphere, Greenhouse is the place for you. Contact our Admissions Navigators today to begin your own journey back to yourself again.

Reach out to us any time, day or night
Our Admissions Navigators are available to help 24/7.

Get the Care & Support You Need

Traveling for healthcare & essential services is permitted across the US. Addiction treatment is essential, and we are here for our patients in this difficult time. Greenhouse is taking every precaution to ensure patient and staff safety. We are able to test incoming & current patients to ensure peace of mind and focus on addiction treatment.
Ready for Recovery?Let's help you take the next step.