What is Cyclobenzaprine (Flexeril)? 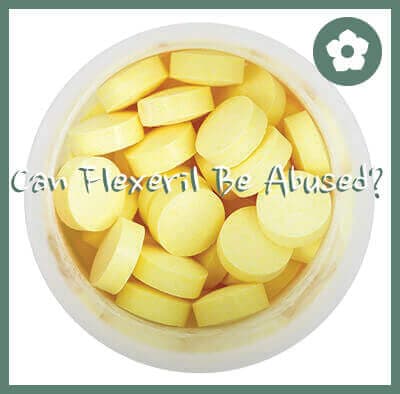 Though its mechanism of action isn’t entirely clear, Flexeril is thought to primarily act on the brainstem to elicit its therapeutic effects. One common off-label use for Flexeril is for the treatment of fibromyalgia pain and associated muscle spasms.3  Other off-label uses include:4,5

Flexeril is not listed by the United States Drug Enforcement Agency as a controlled substance; however, it can only be legally obtained with a prescription and should be taken under the supervision of a doctor for treatment of a specific medical condition. Cyclobenzaprine is available as immediate- and extended-release tablets and capsules. Flexeril is typically used in conjunction with physical therapy or exercise and other forms of treatment for applicable conditions.

Statistics of Abuse of Cyclobenzaprine

According to the National Institute on Drug Abuse or the NIDA estimated more than 50 million americans aged 12 and over have reportedly abused a prescription drug at least once in their life. There were 25.2 million prescriptions wrote in 2011 that included cyclobenzaprine such as Flexeril.

There is a potential for the development of withdrawal symptoms following an abrupt discontinuation of Flexeril use. Since the effects of withdrawal may be relatively mild compared to other, more severe syndromes of acute withdrawal (e.g., opioids, benzodiazepines), the symptoms associated with stopping Flexeril may be more commonly referred to as Flexeril discontinuation symptoms.

The common reported discontinuation or withdrawal symptoms include:1

The presence of discontinuation symptoms alone is not indicative of addiction.

Cyclobenzaprine medications are not DEA Scheduled drugs and, therefore, the potential for abuse and dependence with Flexeril is considered to be relatively low. However, the drug is known to enhance the effects of other substances such as alcohol, benzodiazepines, and opioids. The DEA indicates anecdotal evidence  of non-medical misuse of cyclobenzaprine for its potential euphoric, sedating effects.6

In addition, there was an 84 percent increase in emergency room visits from 2004 to 2011 related to muscle relaxant use, with Flexeril accounting for more than half of these visits.7 Moreover, after the muscle relaxant drug carisoprodol, or Soma, was reclassified as a Schedule IV drug by the DEA in 2011, Flexeril misuse may have experienced an uptick (since it is presumably relatively easier to obtain as an unscheduled substance).

As mentioned, polysubstance use involving cyclobenzaprine may occur in an attempt to enhance certain psychoactive effects. It appears as if at least some of the abuse of Flexeril occurs in this context.6 Moreover, the use of Flexeril beyond the 2-3 week timeframe for its therapeutic effects would also indicate abuse, as would buying Flexeril without a prescription or using it in a manner that it is not intended to be used.

Signs of Cyclobenzaprine Abuse and Addiction

Though its abuse potential may not be as pronounced as that associated with other more commonly thought of drugs of abuse like cocaine or heroin, problematic patterns of misuse may develop even with a drug like cyclobenzaprine. A number of signs can point to a problem with compulsive Flexeril use—either alone or in combination with other substances.

Some signs, symptoms, and behavioral changes associated with substance addiction, or a substance use disorder, include:8

Professional treatment for Flexeril abuse—whether in combination with other substances or alone—can help people end their compulsive use and improve their health and wellbeing. Because the discontinuation syndrome associated with Flexeril is relatively mild, intensive medical detox may not be necessary, though it would be best to consult with a physician or other treatment professional about the right course of action. Though intensive medical detox interventions may not be necessary, the structure and supportive care offered during professional detoxification can help make the process more comfortable and facilitate early recovery. If additional types of substance dependence (e.g., alcohol, opioids, sedatives) are a factor, medical detox may be necessary.

Beyond detox, professional substance abuse treatment may include:

Although it is an unscheduled drug with a relatively low potential for abuse, people can develop compulsive patterns of use with cyclobenzaprine, which can lead to serious consequences. People who receive understanding and support regarding their Flexeril abuse as part of professional treatment can be successful in making positive changes in their lives and getting off the drug.