What Happens When You Mix Adderall and Xanax?

Xanax and Adderall are two of the most widely prescribed (and popularly misused) psychiatric medications in America. Xanax has reached a point of such cultural dominance that The New York Times wrote of “the United States of Xanax,” while the ubiquity of Adderall prompted another in-depth piece on “Generation Adderall.”These two medications help manage certain conditions that millions of people struggle with, but as a result of their mechanisms of action, they also carry the risks of abuse and addiction. Additionally, intentionally mixing these medications for the sake of a combined high can be a dangerous mix—one that can pose risks to both their mental and physical health as well as their overall well-being. 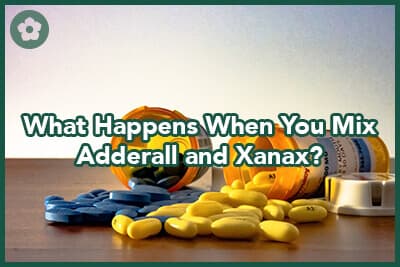 Xanax is considered relatively safe when used as prescribed; however, misuse of the drug can be incredibly risky and result in serious health consequences. Xanax abuse occurs in a number of ways. People may:4

When someone begins abusing Xanax, they will often feel sleepy and clumsy, for example they may stumble or fall when trying to walk.2

Tolerance and physical dependence will develop to some degree even with normal prescription use, which is why medications like Xanax are intended for short courses of use that should be monitored closely by the prescribing physician.

In this manner, doctors are able to help to make careful and safe dose adjustments to account for tolerance and can help to ensure a safe withdrawal for their dependent patients who wish to get off Xanax. Those who misuse Xanax may increase their doses continually on their own in order to combat tolerance, subjecting themselves to ever-growing risks and severe physiological dependence. They may also be unaware of just how dangerous withdrawal can be and attempt to go cold-turkey on their own, a move that can threaten their lives.

Withdrawal symptoms can be quite serious and may include:1

Xanax alone has numerous risks and side effects, especially when misused. People may compound these risks when they combine their use of Xanax with other substances, such as Adderall. This all-too-common practice of mixing “uppers” with “downers” can result in a number of additional risks to an individual’s health.

On the other end of the drug effects spectrum is Adderall, a brand name for a prescription stimulant medication that combines amphetamine and dextroamphetamine. While benzodiazepines like Xanax work by calming activity in the central nervous system (CNS), Adderall is prescribed because it stimulates certain physiological processes, making people feel energetic, alert, and productive.

While Xanax targets GABA, Adderall primarily influences the activity of two neurotransmitters—dopamine and norepinephrine. An increase in dopamine activity accompanies a person doing something pleasurable or rewarding. By doing so, it reinforces that action and often leads to a sense of anticipation to do that activity again. Norepinephrine also plays a role in the stimulating effects on the body and leads to:8

Like Xanax, Adderall has legitimate medical uses. It is prescribed for the treatment of attention deficit hyperactivity disorder (ADHD) as well as the sleep disorder narcolepsy.7 When used as directed in people with ADHD, users may feel more focused and able to concentrate than they normally would while experiencing a relief from hyperactivity and restlessness.

Much like Xanax, Adderall is an effective medication when used as intended but can be abused. People may misuse the drug by:8

Adderall has become a widely misused drug on college campuses and in the high-stakes corporate world, where students and executives have to perform mentally taxing activities with little sleep.2

People who abuse Adderall may be subject to:8

People abusing Adderall might do so on long binges where they consume high doses for long periods of time. Frequently, once the binge ends, a crash follows, during which the user might suffer from:8

Due to its potential for abuse (and the risks associated with such abuse), Adderall is a Schedule II controlled substance.7 As a Schedule II controlled substance, the DEA recognizes the legitimate medical uses of Adderall, but puts restrictions on its production, distribution, and use and warns that there is a high potential for abuse and dependence.