Anorexia is a serious mental health condition with an alarmingly high mortality rate—only second behind that associated with opioid addiction.2 Anorexia can additionally place stress on families and friends as they watch their loved one’s health deteriorate while perhaps struggling to get them the help they need. People with eating disorders may be opposed to any treatment, because weight loss and/or maintaining a significantly low weight can begin to take precedence over other important aspects of one’s life.3,5 At a fundamental level, anorexia is semi-starvation, sometimes combined with purging behaviors and/or other methods to reduce appetite and facilitate weight loss.4

Per the American Psychiatric Association, key diagnostic features of anorexia nervosa include:4


Subtypes include the restricting type and a binge-eating/purging type. With the former, weight loss is accomplished through fasting, dieting, or excessive exercise behavior, while the binge/purging type (a separate diagnosis from bulimia) may include recurring episodes of vomiting as well as laxative, diuretic, and/or enema misuse.4

The National Institute of Mental Health (NIMH) website indicates that the median age of onset for anorexia nervosa is 18 years old. Based on survey information, for adults 18 and older in the U.S., the lifetime treatment rate for anorexia is approximately 33.8%—a discouraging figure that suggests that a substantial amount (roughly two-thirds) of people do not get the help they need.1

In 2003, the National Center on Addiction and Substance Abuse (CASA) reported that as many as 50% of those with an eating disorder also abuse substances (alcohol or illicit drugs)—a rate roughly five times greater than that seen in the general population.6 Conversely, as many as 35% of people with substance abuse or dependence issues were found to also have eating disorders. This overlap underscores the need for proper support and treatment protocols that will allow individuals with these co-occurring conditions to reclaim their lives.

In 2011, the Substance Abuse and Mental Health Services Administration (SAMHSA) published an advisory regarding co-occurring substance abuse and eating disorders. The advisory highlights the fact that eating disorders (EDs) frequently co-occur with substance use disorders (SUDs), and discusses some of the challenges of integrated treatment for both. The advisory cites several studies to support the relationship between EDs and SUDs, including one that found that as eating disorder intensity increased, the number of different substances being abused increased as well.7

Helping a Loved One with Anorexia

It is very difficult for family and friends to watch a loved one struggle with what could ultimately result in severe deterioration of their health and even death. What begins as abnormally restrictive food intake could, left untreated, progress to outright starvation. The weight loss becomes substantial, their physical appearance changes, and they are clearly quite ill. They may deny and argue when faced when the assertion that they are too thin. Though it may often be challenging to encourage someone into treatment (and treatment outcomes may be somewhat improved when an individual willingly embraces their recovery), the end result of such treatment can save lives.3

Treatment of Anorexia and Addiction

Historically, treatment programs for substance use disorders have not always been equipped to manage co-occurring eating disorders and vice versa. As a result, though a patient may have received appropriate treatment for one disorder, they might not have for both.6 However, as awareness of this common comorbidity has risen, and as effective, integrated recovery strategies have been developed, the treatment landscape has been changing. 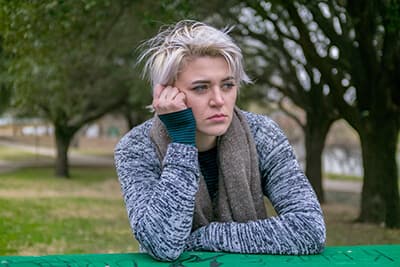 Anorexia, with its association with suicidal thoughts and other deleterious health effects, can be life-threatening. Similarly, the cumulative health risks of addiction are to be taken very seriously.

Acute treatment for severe cases of anorexia often focuses on refeeding to stabilize a patient and allow for better focus on continued recovery efforts.3,6 Longer-term management of co-occurring eating disorder and substance use disorder may involve a multi-disciplinary team and the administration of several psychosocial, behavioral, and pharmacological interventions.3 Given the complexities of such a dual diagnosis, residential treatment is an appropriate treatment setting for people with these co-occurring disorders.8

Treatment for anorexia and addiction commonly involves a multidisciplinary treatment strategy, which may utilize several different therapeutic techniques, such as:1,6,7

Cognitive Behavioral Therapy (CBT)—helps a patient better understand the interconnectedness of thoughts (e.g., distorted body image, etc.), feelings, and behaviors surrounding maladaptive patterns of eating and/or substance use, to make healthier choices moving forward. A therapist trained in CBT can work with the individual by helping them identify negative thought patterns, work through their roots, and give the individual new tools to manage their illness.

Medications—when appropriate, such as antidepressants for co-occurring depression or anxiety, as well as medication-assisted treatment medications for substance use disorders such as alcohol and opioid use disorder.

Nutrition counseling—involving dietitians and other health care professionals to help change unhealthy dietary patterns and maladaptive beliefs about food. Nutrition counseling allows them to develop healthy eating habits that can sustain them post-treatment. Healthier food planning and weight monitoring duties are sometimes shared with other members of the treatment team (e.g., mental health therapists) as well as family members. 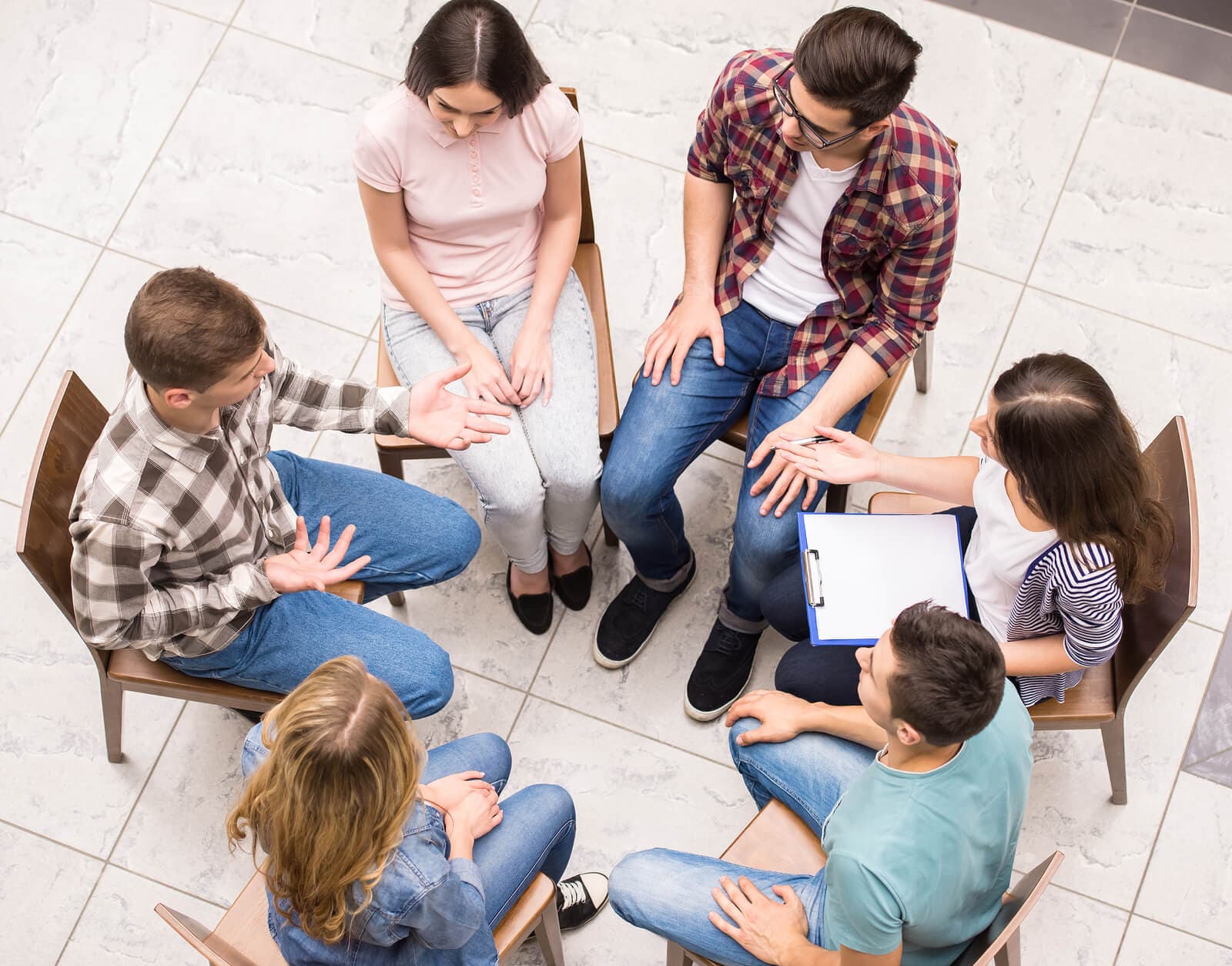 Family therapy—can be immensely beneficial as it empowers family members to help ensure healthy eating and otherwise support recovery. Family therapy also can be very effective in repairing relationships that have been damaged by the eating disorder or ongoing addiction. Under direction from a therapist, the client can talk with their family, and together, they may identify environmental triggers or activities that could invoke previous habits that may endanger their health.

An emphasis on relapse prevention—to help those in recovery from eating disorders and substance abuse make healthier decisions and avoid stressors, triggers, or situations where drinking, drugs, or food have been maladaptively used in the past.

Self-help approaches—which may include structured audiovisual materials or manuals based on the principles of cognitive-behavioral therapy or peer-led support groups such as Overeaters Anonymous (OA) and Eating Disorders Anonymous (EDA). Support groups can be an excellent way for those with eating disorders to connect with peers on a different level than in other types of relationships. These groups allow participants to learn from others who have been in similar situations. They provide an invaluable source of support for those in recovery from both anorexia and substance abuse.

People with both a substance use disorder and anorexia may benefit from an integrated, multi-disciplinary treatment strategy.6 Despite the strong grip that anorexia and addiction can have on a person, there is hope for full recovery. Given the high incidence of associated medical issues and the potential for significant psychiatric instability, people with co-occurring SUD and ED issues may particularly benefit from treatment in an inpatient or residential environment, where their safety can be the top priority.

Help is just a phone call away. If you or someone you love is struggling with addiction and are unsure of what to do, call us today at . Greenhouse Treatment Center, American Addiction Centers’ rehab in Texas, is ready to help you get the treatment you need today.

co-occurring disorders
Prefer getting help via text?
We're available 24/7 via text message. Signup below for access to our team when its convenient for you!
and many more...
✕
Instantly Check Your Insurance Coverage
Your information is safe & secure
At Greenhouse, we accept most types of private (non-government) insurance and offer a variety of payment options.
You can quickly and privately check your insurance benefits to see if you're covered for addiction treatment services. We’ll be able to tell you if your provider is in network with Greenhouse Treatment Center and all American Addiction Centers locations.
This means your treatment may be FREE1 depending on your policy, copay, and deductible.
Get the Info & Help You NeedWe're open across the US. Learn about your options.