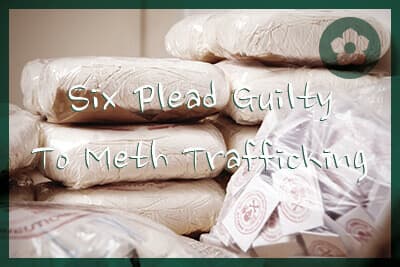 Law enforcement pulled over the defendants for traffic violations at different times, seizing a total of 15 pounds of methamphetamine and firearms. Some of the defendants confessed to trafficking “pound-quantities” of meth in and around a number of major cities in Texas, according to ICE.

This is not an isolated incident, nor is it the only methamphetamine trafficking ring in town.

In North Texas, a man was convicted after a two-day jury trial on one charge of conspiracy to possess with intent to distribute 500 grams or more of a substance containing a detectable amount of methamphetamine, according to ICE. He will not be sentenced until April, but will receive 10 years to life in a federal prison.

In this case, the man was not a trafficker, but the owner of an illegal gambling business and knowingly allowed members of the Aryan Brotherhood (AB) to traffic methamphetamine and conduct gang business on the premises.

In July of last year, Texas law enforcement officers seized 75 pounds of liquid meth hidden in cleaning jugs. In the fall, there were indications in and around Dallas that a new Mexican drug cartel shut down in the area in 2016 was back and implementing a massive methamphetamine trafficking ring. It is clear that methamphetamine is all over the state, in large quantities. It’s in high demand, and people are sacrificing their lives to use and sell it.

The problem of methamphetamine use and abuse across the state is rapidly growing. It is triggering significant legal and law enforcement reaction, and it’s the cause of a steadily rising rate of drug overdose deaths. For families across Texas, the harm caused by methamphetamine is physical, mental, and emotional in nature, and like addictions to all substances of abuse, a meth use disorder significantly impacts the wellbeing of everyone in the family.

If someone you love is struggling with methamphetamine addiction, know that you are not alone. There is support, treatment, and help for both you and your loved one. Are you ready to learn more about your options for treatment in 2018 and start forging a positive path forward?