Sex, Drugs, and Guns: How the Feds Are Cleaning up South Texas 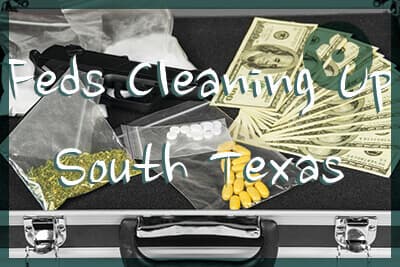 A street gang operating out of Houston is the focus of a recent federal investigation. So far, 22 people have been arrested for allegedly taking part in gun trafficking, drug trafficking, human smuggling, and prostitution rings in connection with a gang. Another nine warrants for arrest related to the investigation are still outstanding.

Arrestees were charged with running brothels out of a number of Houston apartments where they sold guns and drugs as well. Many of the prostitutes were female immigrants from Mexico, promised the opportunity of paying off their debt to the smugglers by working in Texas restaurants but forced into prostitution instead. If the victims refused to prostitute themselves, they and their families were threatened and/or harmed, and many were tattooed with the names of their captors to identify them as property and exert control. Through the course of the investigation, seven women were identified as victims of the prostitution ring, and during the arrests, another six women were found, the youngest of whom was only 14 years old. Additionally, another 16 people who had been smuggled into the country were found in “stash houses” across Houston, including two Chinese nationals who had paid $40,000+ to get into the country.

Six government operations, including the Federal Bureau of Investigations (FBI), Harris County Sheriff’s Office, the Drug Enforcement Administration (DEA), and a number of immigrant enforcement organizations, worked together to create the 37-count indictment that was handed down this month. These organizations worked together as part of the Houston Law Enforcement Violent Crime Initiative, an initiative started in June of this year with the purpose of taking down the area’s most violent offenders while also working to create awareness in the community.

Among the many violent and grotesque charges are several charges of methamphetamine and heroin trafficking as well. When compared to some of the other horrific things allegedly happening in this case, it may seem like a small thing by comparison, but this investigation is a demonstration of the fact that drug abuse is not a harmless choice. Every street sale of heroin, methamphetamines, or cocaine is the end result of a long trail of crime, abuses, violence, and continued harm that keep violent people in business.

Arrests associated with this investigation may have closed the doors of a few operations run by this gang, but it is unlikely that any long-term or real damage was done to the gang itself. As with most cases like these, other people will likely jump at the opportunity to take their place. When there is a market for big sales, there will be no shortage of people offering to provide the goods and services.

What Does This Mean for Texas?

Investigations like these demonstrate to Texans and Americans across the country just how insidious the nature of drug trafficking can be. Here, where many of us feel safe from the problems facing the Middle East and South American countries devastated by the violence of drug cartels, it can be shocking to realize that these things are happening in our own backyards. In addition to the high rate of overdose deaths that continues to rise every year in the United States, there are also repercussions of untreated drug abuse and addiction, including funding organizations that contribute to human trafficking, sex trafficking, and gun trafficking as well as violence to maintain those streams of income.

Eye-opening cases such as these can put a stamp of urgency on connecting those who are struggling with addiction with treatment that can help them begin their own personal journey to healing. With this help, they can stop harming themselves and also contribute to ending these other far-reaching harms. Government funding and a focus on task forces and initiatives such as these are important. They serve as a reminder that there are real, human consequences of untreated addiction that continually supplies gangs with a customer base.

Is Treatment the Right Move for Your Family?

If you, or someone you love, are struggling with an ongoing addiction to any street drug, the time is now to get the help needed to address the addiction disorder. The only way to avoid overdose and other harms associated with interacting regularly with dangerous people is to get treatment and put all use of substances in the past. Is today the day you take a stand to better your life and the lives of your family members, and improve your community in the process?