Ecstasy and Molly (and “X” or “E”) are street names for a drug abbreviated as MDMA, which stands for 3,4-methylenedioxymethamphetamine. It’s also known by other names such as Molly, X, or E. It has effects of both a stimulant and a hallucinogenic, can cause increased wakefulness and energy along with feelings of energy, euphoria, increased sexual desire and satisfaction. It also gives people a heightened sensory perception, sociability, empathy, and a sense of being close to other people.1

MDMA is generally taken as a capsule or tablet. The effects of the drug can begin in as little as 30 minutes and last approximately 3-6 hours. Without further consumption of the drug, users then begin to “come down” where they experience depression, anxiety, fatigue, insomnia, hallucinations, bizarre and reckless behavior, and difficulty concentrating.1

As with many drugs of abuse, there are claims about MDMA that may or may not be true. We’ll evaluate three questions about ecstasy, Molly, and MDMA. 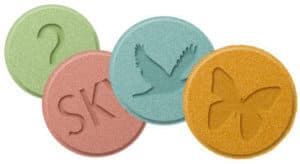 Ecstasy, Molly and MDMA are the Same Drug

MDMA gained popularity amongst psychotherapists in the late 1970s and 1980s, who were researching its utility in therapy sessions to help people suffering from a variety of mental disorders.2,3 In the mid-1980s, following seizures of MDMA in several states (a large proportion of them from Texas), the DEA added 3,4-methylenedioxymethamphetamine (including its “other names” of MDMA, Ecstasy and XTC) to the list of Schedule 1 drugs.3,4

Ecstasy use escalated in the late 1980s and early 1990s and evidence shows that the illicit tablets sold as “ecstasy” or “XTC” during this period nearly always contained MDMA.5

During the mid-1990s, a majority of ecstasy tablets still continued to contain MDMA, however many others included other amphetamine analogues like MDA (3,4-methylenedioxyamphetamine) and MDEA (3,4-methylenedioxyethylamphetamine). A small proportion (4-20%), contained caffeine, ephedrine, ketamine, paracetamol, or placebo. During the late 1990s, the proportion of ecstasy tablets containing MDMA increased to around 80-90%.5

As ecstasy use spiked in the early 2000s,6 however, MDMA purity continued to decline. A study of samples collected between 1999 and 2004 found that 46% of tablets sold as ecstasy containing no MDMA at all and an additional 15% comprised of a mixture of MDMA and other drugs (amphetamine analogues such as MDA, MDEA, methamphetamine as well as ketamine, cocaine, caffeine, pseudoephedrine, and the over-the-counter cough suppressant dextromethorphan (DXM).7

The 2018 NIDA Monitoring the Future Study mentions “Molly” as being reported as a purer form of MDMA around 2013.6 In fact, the drug known as Molly likely suffers from the same, if not higher, impurity levels as ecstasy.8 DEA reported that only 13% of the Molly it analyzed in New York between 2009 and 2013 was MDMA.9

Although both ecstasy and Molly are street names for MDMA, no matter it’s called, you can never be certain of what’s really in the tablet, pill, capsule or bag of powder.

MDMA Causes Holes in the Brain

Although MDMA doesn’t cause physical “holes” in the brain, evidence suggests that long-term or heavy use (such as repeated doses taken one after another) can negatively affect the brain.10,11 Researchers have also demonstrated an association between verbal and visual memory impairments with chronic MDMA use.10

Studies have shown the degeneration of serotonin nerve terminals in the brains of animals and humans following MDMA use. Low serotonin is associated with poor memory and depressed mood. There’s evidence of recovery from this damage over time, but also conflicting evidence, suggesting some of the damage may be longer term, if not permanent.10,11

Research in animals hasn’t been conclusive when it comes to demonstrating tolerance and addiction; however, regular users of MDMA often report a diminished response to the drug over time, including feeling a constant need to escalate their dose. This suggests that tolerance to MDMA develops rather quickly and appears to result in compulsive use despite problems such as difficulty stopping use, spending excessive time to obtain the drug as well as unpleasant withdrawal symptoms.12

Ecstasy dependence isn’t as strong as the dependence experienced by those who heavily use alcohol, cocaine, opioids or methamphetamine and the withdrawal symptoms are not as pronounced or as dangerous.12 Those struggling with compulsive use of ecstasy or Molly can be effectively treated with cognitive behavioral interventions such as rehab at a drug treatment support as well as recovery support groups.13

Greenhouse Treatment Center has the experienced and licensed medical staff to help patients undergo treatment specific to their needs. If you find that you’re struggling with the misuse of ecstasy or Molly, options are available. Together we can help you reach long-term sobriety one step at a time.

You don’t have to do it alone; help is just a call away. Call us at and we can help you find the right rehab program for you or your loved one. Whether you choose to attend our drug treatment program in Texas at Greenhouse Treatment Center or at one of American Addiction Centers’ other rehab facilities across the United States, we will be there with you at every step of the way.

club drugshallucinogensmdma
Prefer getting help via text?
We're available 24/7 via text message. Signup below for access to our team when its convenient for you!
and many more...
Your Next StepsRecovery is possible. We're here to help with your addiction.