Klonopin and Alcohol: Dangers of Mixing

Central nervous system (CNS) depressant substances like alcohol and sedative drugs have inherent health risks, even when used alone. However, some people double-up (or triple-up, etc.) when it comes to these and other types of substances—both prescription and illicit. Though deaths from taking benzodiazepines alone are rare, using them in combination with certain types of substances such as alcohol significantly increases the risk of severe health consequences—including coma and death.1

Klonopin, which is also available as generic clonazepam, is a benzodiazepine prescribed to treat panic disorder and certain seizure disorders.2 Klonopin is one of the most widely prescribed benzodiazepines; perhaps unsurprisingly, it is also one of the most commonly diverted sedative medications for nonmedical misuse.3Benzos like clonazepam in combination with substances like alcohol and opioids are also frequently involved in emergency department visits; such combinations significantly increase the risks of serious outcomes such as the need for hospitalization, transfer to another medical facility for more-intensive care, or death.4

Can You Overdose on Klonopin and Alcohol?

Alcohol and benzodiazepines act similarly in terms of their inhibitory pharmacodynamic actions.6 As a result, the combined CNS depression that can be reached by drinking while using benzodiazepines can more easily lead to dangerous respiratory slowing.2,3 The resultant lack of oxygen delivery to the brain can lead to rapid cell death in the brain, resulting in anoxic brain injury, coma, and death. Additional risks of this synergized CNS depression include in profoundly altered mental status, decreased response time, marked incoordination and increased risk of falls/injury.1,6

Other potentially severe and/or dangerous symptoms of concurrent benzodiazepine and alcohol use include:2,6,7,9

CNS depressant overdoses should be treated as medical emergencies. If you suspect that, after taking Klonopin, drinking alcohol, or both, you or someone else might be experiencing an overdose, call emergency medical services immediately. 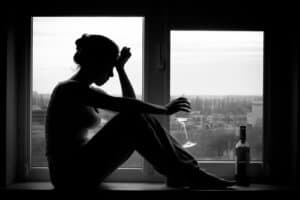 Another serious health risk of concurrent, excessive use of alcohol and Klonopin is the fact that both substances are associated with physical dependence and potentially severe—and in some cases deadly—withdrawal symptoms. Anyone who develops significant concomitant dependence to both of these substances could experience a particularly challenging, and potentially-complicated combined withdrawal syndrome.1

Withdrawal Symptoms and Effects of Klonopin and Alcohol

The most dangerous symptoms are seizures, which can be lethal if they become severe. However, agitation, hallucinations, and delirium may also be associated with problematic behavior that can increase the likelihood of injury of the affected individual or anyone nearby.10

Detox and Treatment for Polysubstance Dependence

It’s never a good idea to mix substances. Having a thorough understanding of the risks involved may help people to make safer choices. One of the most important precautions a person can take in terms of reducing the potential harms of substance use is to ensure that overdose situations are avoided, such as those which are more likely to occur when combining CNS depressant substances like alcohol and benzodiazepines; additionally, should such a pattern of drug use be part of a larger substance use disorder or addiction, withdrawal management and other treatment options for polydrug dependence and addiction can help people embark on recovery.

Greenhouse Treatment Center has experienced and licensed treatment staff to help patients manage withdrawal and undergo treatment that meets their specific needs. If you find that you’re struggling with compulsive drinking, Klonopin use, or both, options are available. Together we can help you your long-term sobriety goals.

alcohol
Ready to get started?
We're available 24/7 to answer questions and help you make decisions about starting recovery.
Your Next StepsRecovery is possible. We're here to help with your addiction.