Trazodone is an antidepressant medication that has several off-label uses, including the treatment of insomnia, anxiety, bulimia, Alzheimer’s disease, and even substance abuse treatment.1 The drug was formerly available as Oleptro and Desyrel, but both brands are now discontinued.2

When used as directed under medical supervision and direction, trazodone can be a relatively safe therapeutic medication; however, there are several troublesome side effects that could be made more severe in overdose, including the following:6

The drug should only be taken as prescribed by a medical professional. This is especially important for the younger population of trazodone users. The U.S. National Library of Medicine (NLM) warns that taking trazodone may actually increase suicidal thoughts and tendencies in some people, especially in children, adolescents, and young adults under the age of 25, and it can have unpredictable effects on a person’s mental health status. An increase in suicidal ideation could also occur any time the dose is increased, so those who are misusing the drug may be in greater danger.6 Always report any suicidal thoughts to your physician, and seek emergency help if you have immediate thoughts of attempting suicide.

Trazodone is relatively safe in overdose; when medical help is received, death or permanent harm is unlikely.5,10 Mixing trazodone with alcohol, benzodiazepines, or other central nervous system depressants, however, can increase the likelihood of overdose complications and/or death.5,7,8,9 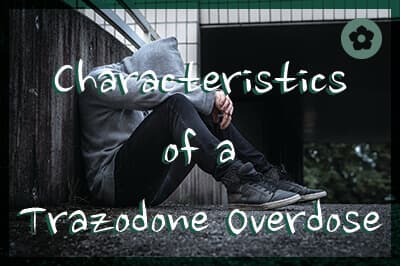 The following are potential signs of a trazodone overdose:9

A trazodone overdose can be complicated by the presence of other drugs or alcohol as well as by medical or mental health conditions. Biological and genetic factors, such as metabolism, family or personal history of mental illness and/or substance abuse and addiction, can also play a role in the severity of a trazodone overdose.

There is no specific medication to reverse a trazodone overdose; however, medical intervention could be necessary to manage and minimize the possible effects of an overdose.9,10A trazodone overdose can be complicated by the presence of other drugs or alcohol as well as by medical or mental health conditions.

How Much Trazodone to Overdose?

Though trazodone is a relatively safe medication and often not a drug thought of when it comes to abuse, overdosing on trazodone is possible. But the dosage of trazodone varies based on the condition it is prescribed to treat, and therefore the amount needed to overdose changes, too.

For adult patients, a typical recommended trazodone dosage is around 150 mg per day, although the maximum dose can surpass 400 mg. Depending on the condition the medication is prescribed for, like major depressive disorder and severe depression, inpatient treatment dosages may surpass 600 mg per day.

Anything beyond the above dosages can be a risk of an overdose of trazodone.

Any time a person uses a drug without medical direction or need, it is abuse. The National Institute on Drug Abuse estimates that over 50 million adults in the United States have abused a prescription medication for non-medical purposes at some point in their lives. Prescription drug abuse is a public health concern that impacts nearly one-quarter of the American adult population.

Trazodone, and other prescription drug abuse, is risky, and the odds of an overdose are greatly raised by medication misuse, especially when multiple substances are involved. Addiction treatment, or rehab, can reduce the risk of overdose by managing medication misuse and physical dependence. Treatment, whether inpatient or outpatient, can help a person uncover the  potential triggers, or stressors, that may be encouraging their drug abuse and manage any potential co-occurring medical and/or mental health disorders. At the same time, rehab can address the physical and emotional impact of medication misuse.