Sedative medications such as Xanax, especially when misused nonmedically, are associated with several side effects. Xanax is a type of benzodiazepine—a class of drugs that work to inhibit certain types of brain signaling. Though these medications achieve their therapeutic effects in this manner, the same underlying mechanism may also lead to a number of uncomfortable or troublesome side effects or, in some cases, give rise to more significant health risks in the future. 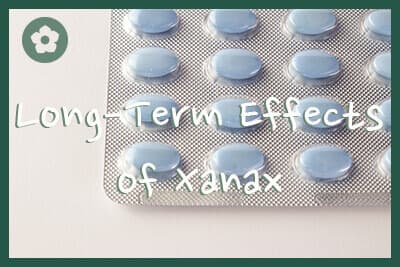 Xanax (also known as alprazolam) and other benzodiazepines are used to treat a variety of medical and mental health issues. Some of the conditions that may benefit from benzodiazepine management include:1

Xanax, specifically, is primarily indicated to treat anxiety disorder and panic disorder.2 Xanax works by interacting with certain brain receptors to facilitate the inhibitory activity of a neurotransmitter called gamma-aminobutyric acid, or GABA.3 Benzodiazepines and other substances that share similar mechanisms of action are sometimes referred to as a central nervous system (CNS) depressants. Because of their sedating properties, benzodiazepines have several beneficial therapeutic applications; however, their use is also associated with certain problematic side effects.

Most medications have at least some risk for unwanted side effects. In some cases, side effects are relatively mild, and might only result in slight discomfort or inconvenience; others might even resolve at some point, once the body acclimates somewhat to the presence of the drug.

Some relatively mild side effects from Xanax use may include:2,4

In some instances, side effects may develop when Xanax therapy is initiated, then fade over time as tolerance to some of the more subjective effects grows with continued use.5

Often elicited in a dose-dependent manner, some of the potentially more severe side effects of Xanax include:1,2,4,5

In addition to some of the more short-term effects, studies have indicated that the long-term use of benzodiazepines like alprazolam is strongly associated with a cumulatively increased risk of dementia.6

How Likely Are Side Effects?

The likelihood of experiencing certain side effects with benzos like Xanax may increase if the person is using other substances such as alcohol or opioids like heroin, oxycodone, or hydrocodone. In fact, the risk of combining sedatives is so strong that it mandates a warning, like the one included in the drug information for alprazolam through the National Library of Medicine’s MedlinePlus.2,4,5

Many of the aforementioned side effects Xanax arise acutely, making them potentially problematic for the most part in the short-term. For example, a single dose of Xanax can result in some amount of sedation or drowsiness as the drug takes effect.

Some longer-term, yet serious risks, include the aforementioned dementia connection and, especially in the context of additional substance use (e.g., alcohol, opioids), a risk of respiratory-arrest related hypoxic brain injury and resultant long-term debilitating consequences.1,4

Some of the more significant long-term effects Xanax use/misuse are those of pronounced physiological dependence, accompanying withdrawal and, ultimately, addiction development.

One of the major risks of using benzodiazepines such as Xanax is the strong likelihood of significant dependence and, once that has developed, the accompanying risk of a potentially-severe withdrawal syndrome.2

With central nervous system depressants like Xanax, suddenly discontinuing the drug can be dangerous as brain activity trends towards pathological excitation in absence of the drug’s inhibitory influence. Though all benzodiazepine withdrawal syndromes are somewhat similar, the symptoms associated with alprazolam discontinuation are considered to be particularly severe.7Some of the reported symptoms of acute Xanax withdrawal include:2,4,7

In particular, the seizures related to abruptly stopping benzo use can be life-threatening. As a result, it is important to get help from an experienced doctor before stopping benzo use in order to avoid these potential withdrawal effects.

Seizures associated with abruptly stopping benzo use can be life-threatening. As a result, a period of medical detoxification and withdrawal management may be required at the start of treatment to best avoid complications and keep people as comfortable as possible.

Ready to get started?
We're available 24/7 to answer questions and help you make decisions about starting recovery.
Your Next Steps