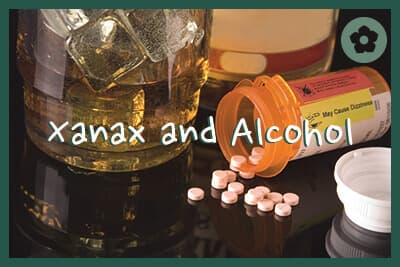 Xanax is a brand name for alprazolam—one of the most widely prescribed anti-anxiety medications in the United States. Though it may be used safely for the short-term management of panic and anxiety, it is also widely diverted for non-medical use.1 Xanax is relatively fast-acting sedative with the potential to elicit a dose-dependent euphoria more so than some other drugs in the benzodiazepine class, which helps to explain its pronounced abuse liability.2

Alcohol is the most widely available and abused intoxicating substance in the US. It is legal for anyone ages 21 and older to purchase and drink, but it is abused by millions of underage drinkers every year.5 For many in the US, drinking is so pervasive and normalized that they might not think twice about mixing prescription drugs and alcohol.

Medication guidelines for Xanax include warnings against using Xanax while drinking or concurrently using opioids or other central nervous system depressant (CNS) substances.3 Alprazolam is a controlled substance with known abuse potential—prescription packaging information urges caution and heightened surveillance when prescribing Xanax to people with a history of alcohol or drug abuse.3

Combining Xanax and alcohol can be dangerous, if not immediately life-threatening. For instance, drinking while taking alprazolam increases the risk of over-sedation, marked decline in coordination and resultant injury, loss of consciousness,  and profound respiratory depression.4 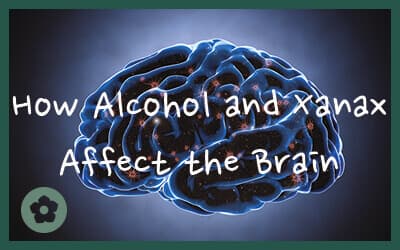 Even with warning labels plainly stating the contraindication, some people may mix their prescriptions with alcohol because they can’t imagine the dangers inherent to such a combination. However, mixing alcohol with Xanax can lead to several adverse outcomes.

In a worst-case scenario, it increases the risk of overdose and death. But, even short of life-threatening consequences, it can also increase the risk of blackouts, memory loss, and accidental injury.7 These substances can compound or synergize each other’s effects because, at a neurostructural level, they both act somewhat similarly to increase the inhibitory (i.e., CNS depressant) activity of the gamma-aminobutyric acid (GABA) neurotransmitter.6

MORE ON MIXING WITH ALCOHOL:

Symptoms and Signs of Concurrent Xanax and Alcohol Abuse

Mixing alcohol and Xanax can result in a dangerous synergy of each respective substance’s sedative effects, which could potentially result in a number of adverse physiological effects, including:4-10

Combination overdoses can be deadly. If you’re concerned that you or someone nearby is experiencing an overdose, call 911 immediately to get them emergency medical attention.

Managing Withdrawal from Xanax and Alcohol

Abruptly quitting or attempting to cut back on both drinking and benzo use can result in a pathologically excitatory brain signaling (much the opposite of the environment artificially achieved with the consistent inhibitory influence of alcohol and Xanax), which can lead to symptoms such as:6

In many cases, people addicted to CNS depressant substances should not attempt to quit using them abruptly without medical supervision and support.8 The need for medical detoxification and withdrawal management for cases of polysubstance dependence—such as Xanax and alcohol—is becoming increasingly common.11

In a withdrawal scenario that involves two substances with potentially severe (and somewhat similar) respective withdrawal risks such as alcohol and alprazolam, medical detox protocols may involve a singular implementation of seizure prophylaxis and other symptomatic management to simultaneously address the situation and keep the patient as safe and comfortable as possible. In this case, withdrawal management would likely proceed with the administration of a longer-acting benzodiazepine or other anticonvulsant agent, which would then be gradually tapered down as the patient progresses through detox.11

A physician or other addiction treatment professional will be able to help assess withdrawal risks and recommend a proper setting for safe detoxification and, afterward, a longer course of addiction rehabilitation (with ample, evidence-based therapy and counseling approaches) to help an individual begin their recovery journey.

Help is just a phone call away. If you or someone you love is struggling with addiction and are unsure of what to do, call us today at . Greenhouse Treatment Center, American Addiction Centers’ Dallas rehab center, is ready to help you get the treatment you need today.

alcoholbenzodiazepinesmixingxanax
Prefer getting help via text?
We're available 24/7 via text message. Signup below for access to our team when its convenient for you!
and many more...
✕
Instantly Check Your Insurance Coverage
Your information is safe & secure
At Greenhouse, we accept most types of private (non-government) insurance and offer a variety of payment options.
You can quickly and privately check your insurance benefits to see if you're covered for addiction treatment services. We’ll be able to tell you if your provider is in network with Greenhouse Treatment Center and all American Addiction Centers locations.
This means your treatment may be FREE1 depending on your policy, copay, and deductible.
Your Next StepsRecovery is possible. We're here to help with your addiction.