Signs of Abuse of Xanax

Xanax is a trade name for a prescription benzodiazepine medication available in generic form as alprazolam. This relatively fast-onset, short-duration-of-action sedative is prescribed to manage generalized anxiety and panic disorder.1

When used alone, Xanax has a certain number of inherent health risks. In the past, alprazolam has been reported as the most common benzodiazepine medication to be involved in emergency department visits related to drug misuse.5 In addition, some of the potentially adverse drug effects associated with benzodiazepines like Xanax can become magnified when used in combination with certain other substances such as alcohol and opioids. In fact, 2017-2018 statistics from the Center for Disease Control and Prevention’s State Unintentional Drug Overdose Reporting System indicate that benzodiazepine medications were involved in 32.5% percent of opioid overdose deaths.2

The Journal of the American Medical Association (JAMA) published a report that looked at nearly 400,000 outpatient care visits from 2003 to 2015 and found that rates of benzodiazepine prescribing nearly doubled (from 3.8% to 7.4%) in that timeframe, including instances of other, co-prescribed sedating medications.3 Drugs like Xanax are not only widely prescribed and, presumably, in medicine cabinets across the country, they are also widely diverted for nonmedical use.4

Some people report certain side effects or adverse reactions in association with Xanax use, even at therapeutic doses. However, some of these risks (including the risk of overdose) may increase with nonmedical misuse that involves dosing that exceeds prescribed parameters or simultaneous Xanax and other intoxicating substance use.1,5,6

The use of benzodiazepines like Xanax can result in the following:1,6,7

While it is not always easy to isolate incidences of side effects resulting from therapeutic use from those in connection with nonmedical misuse, the presence of frequent, numerous, or otherwise significantly problematic side effects could be an indication of excessive use and might indicate whether a loved one is suffering and needs help.

Signs and Symptoms of Xanax Abuse or Addiction

Though recognition of some combination of the above drug effects may be associated with misuse of Xanax, the diagnosis of a Xanax addiction is made—in medical terms, as a sedative, hypnotic, or anxiolytic use disorder—based on several additional diagnostic criteria. Such a diagnosis is generally made by a physician or other mental or medical health professional. Some characteristic features of a substance use disorder involving Xanax used to make such a diagnosis include:8

A person who struggles with an addiction to Xanax may suffer significant setbacks in multiple areas of their life. They may suffer chronic memory loss and experience problems with cognition/learning; they may begin to show disinterest in life, especially at school or work; they may perform poorly at school or work, leading to academic consequences, failed classes, or lost jobs; they may suffer other financial consequences because they spend too much time and money obtaining and using the drug (in some cases, from illicit sources); they may become defensive when questioned about their drug habits, or they may lie to cover up their use of the substance; they may neglect their appearance and stop showering, washing their clothes, or performing other grooming habits; they may experience significantly unpleasant and, in some cases, dangerous withdrawal when attempts are made to quit or cut back on Xanax use; their compulsion to continue using the drug may be furthered by the avoidance of such withdrawal; and, especially in instances of additional substance use (e.g., alcohol, opioids, other sedating drugs), they may be more likely to injure themselves in falls, accidents, or experience an overdose that requires hospitalization.1,3

Get Help for Xanax Addiction and Withdrawal Management 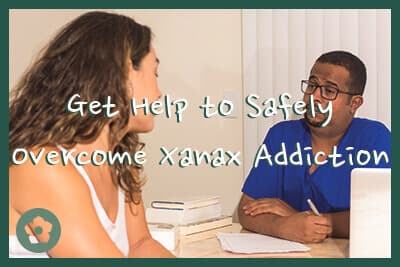 As a pharmacotherapeutic agent, Xanax is intended for the short-term management of symptoms related to panic/anxiety.1 Unfortunately, some people misuse benzodiazepines nonmedically, which can increase the likelihood of adverse health outcomes including the development of significant physiological dependence. The acute withdrawal syndrome associated with Xanax and other benzodiazepines can be markedly unpleasant and, in some instances, dangerous. Agitation, hallucinations, delirium, and seizures/convulsions are all risks associated with abusing Xanax at relatively high doses and/or for long periods of time (e.g., 12+ weeks).1

Even in people with less significant histories of Xanax misuse but who still develop some magnitude of physical dependence to the drug, withdrawal can be uncomfortable; left unmanaged, such an unpleasant withdrawal may make it more difficult to quit and be more likely to compel immediate relapse. A period of medical detoxification and withdrawal management—which may involve a tapering schedule of Xanax or a substituted benzodiazepine (or, in some cases, additional medications such as anticonvulsants)—can ease progress into early recovery and set the tone for more comprehensive rehabilitation for problematic and compulsive Xanax use.9,10