In the United States, there are often different laws that apply to those who are under the age of 18 when it comes to crime and being arrested. Each year the FBI puts out an annual report that contains statistics for a number of specific crimes as well as overall arrests, excluding traffic violations. According to the 2017 FBI data (the most recent report available), out of a total of 689,249 juvenile arrests, 11.54% of these were drug-related. That means over 1 in 10 juvenile arrests are related to drugs with a total count of 79,580.

Out of all these drug-related juvenile arrests, we wondered what this looked like across the country on a state-by-state basis. To find this out, we analyzed the latest Uniform Crime Reporting data from the FBI with some interesting results. 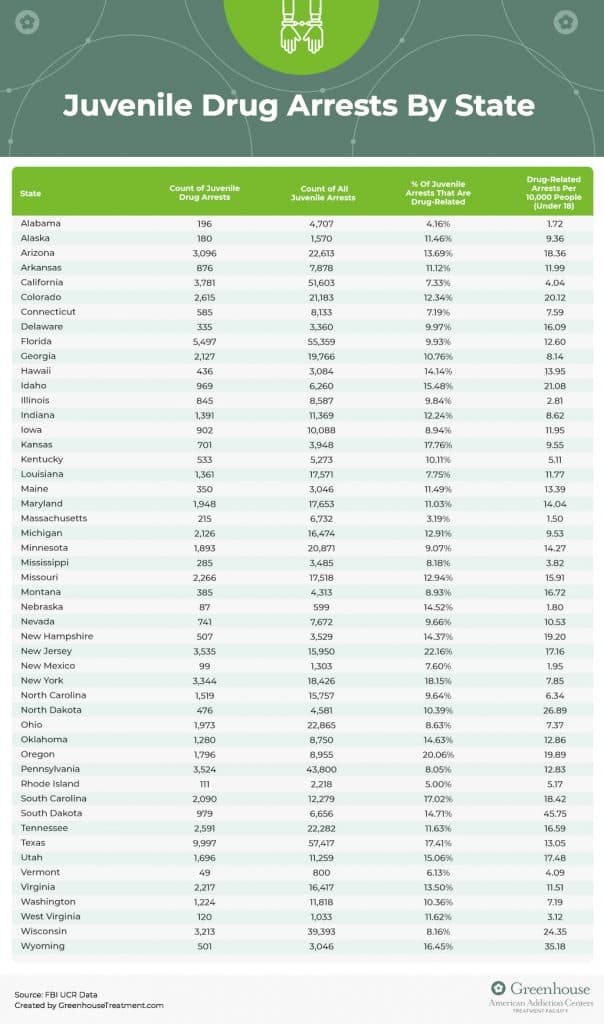 Looking at juvenile drug arrests by state, we can see that Texas has the most with a total of 9,997. While that may not seem surprising at first due to the population size of Texas, that number accounts for just over 17% of all juvenile arrests, the forth highest in the U.S. The raw count of nearly 10,000 is almost double that of the second-highest state, Florida at 5,497 drug-related arrests. From there it drops off even more with California (3,781), New Jersey (3,535), and Pennsylvania (3,524) being the next three highest by count.

The state with the lowest amount of arrests is Vermont with just 49 juvenile drug arrests out of a total juvenile population of 119,800.

States With The Most Juvenile Drug Arrests Per 10,000 People 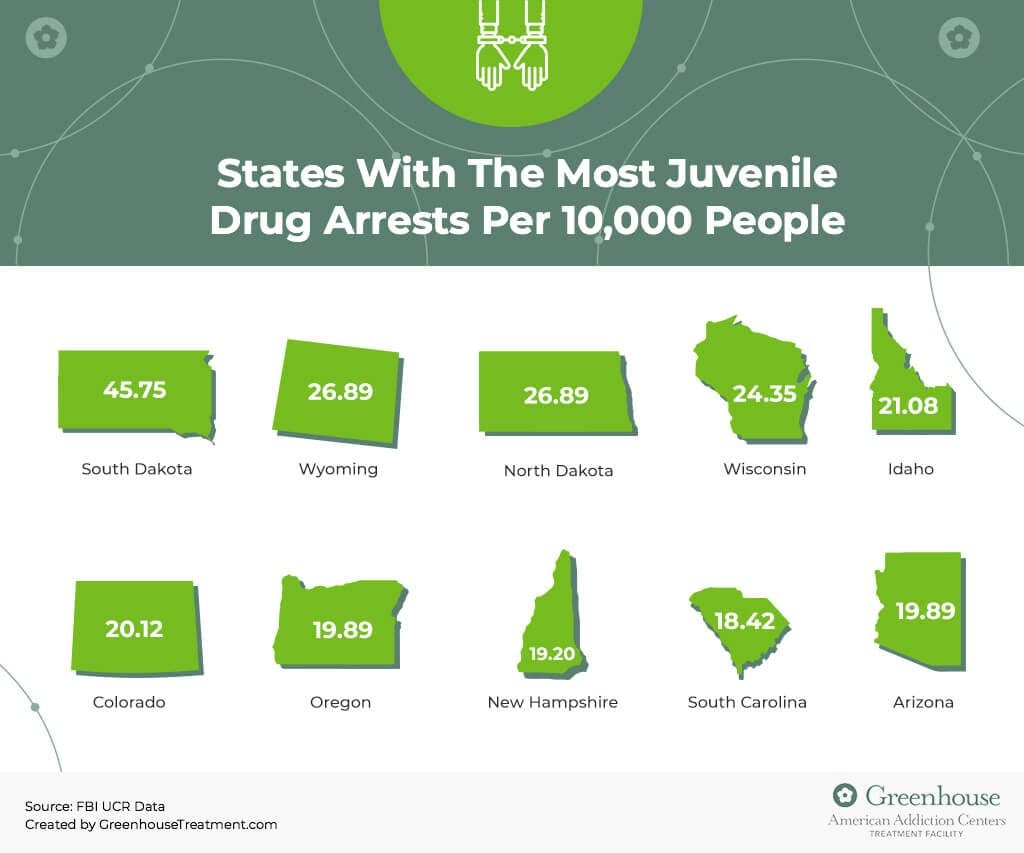 To really drill down into juvenile drug arrests, we decided to look into the number of arrests per 10,000 of each state’s juvenile population to get a more fair representation between the states.

Wyoming and North Dakota follow closely behind at numbers two and three for the highest amount of arrests with 35.18 and 26.89 arrests per 10,000 people, respectively.

States With The Least Juvenile Drug Arrests Per 10,000 People 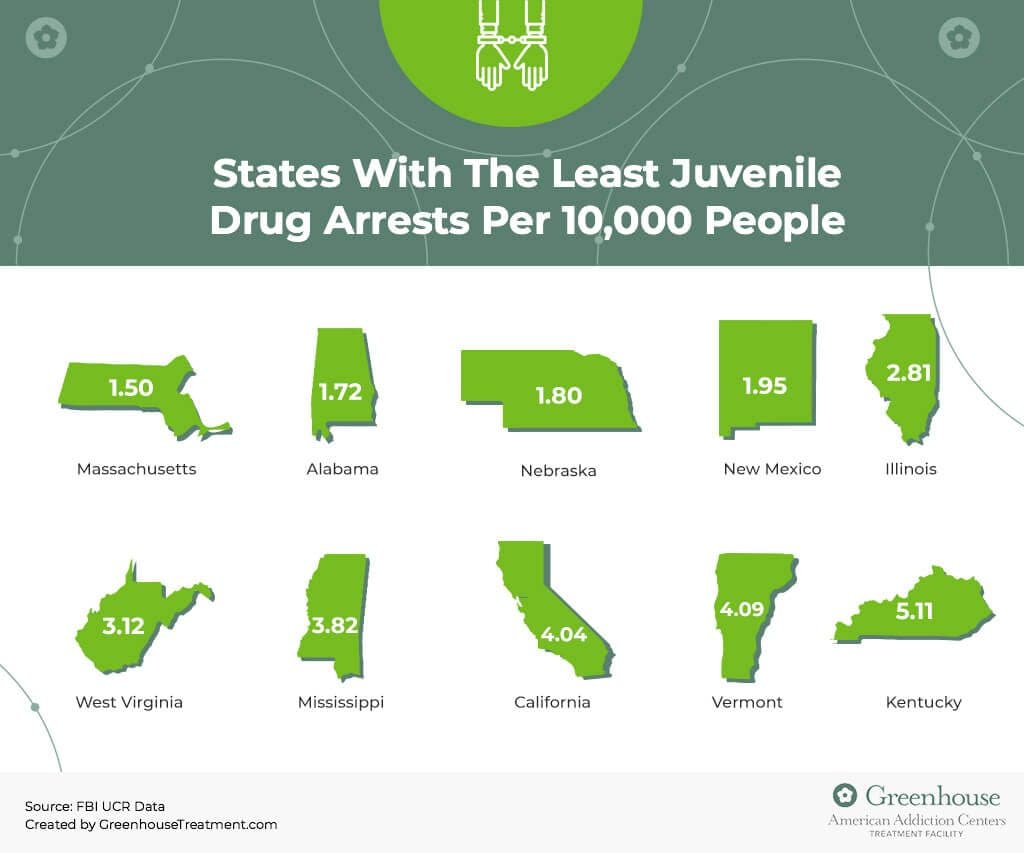 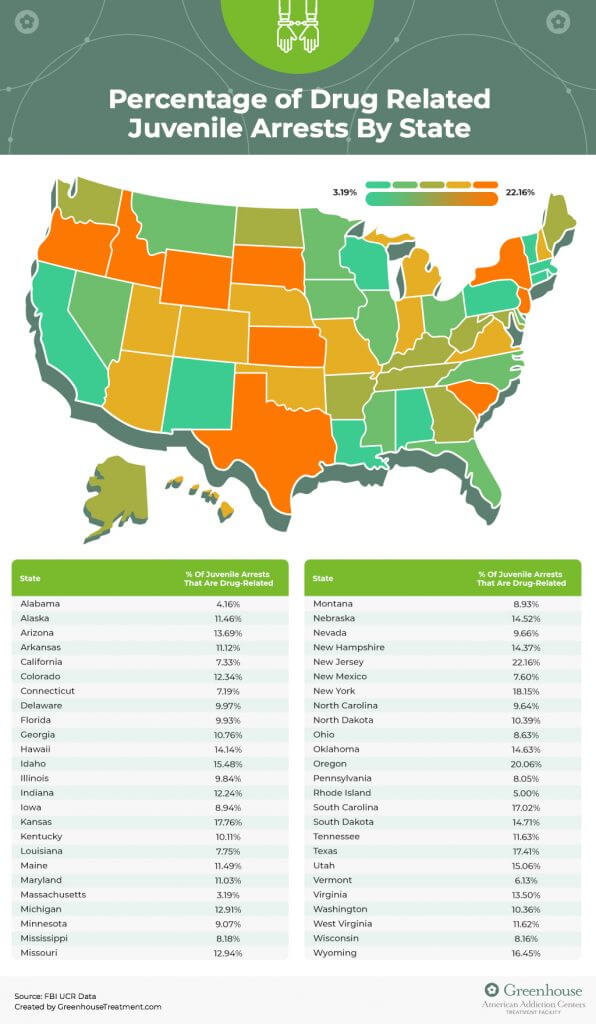 Massachusetts, on the other hand, has the lowest percentage of juvenile drug-related arrests in the country with just 3.19% of all juvenile arrests being drug-related.

It is clear that illegal drug use is a major problem throughout the country in both juveniles and adults and the effects of these drugs negatively impact millions of lives every single day. Just like many other chronic diseases, drug addiction can be managed and treated successfully, allowing people to counteract the disruptive and negative effects drugs have on their brain and behavior so that they can regain control of their lives.

If you know anyone in your life who is suffering from drug addiction, find out more about how you can help.

Can I use this information?