Ritalin is the brand name of the immediate-release form of methylphenidate. Both drugs are typically taken orally, and the use of Concerta reduces the need for multiple administrations of the medication throughout the day. Methylphenidate is also available as a transdermal patch under the brand name Daytrana.2

Stimulants are drugs that stimulate activity in the central and sympathetic peripheral nervous systems, typically by enhancing neurotransmitter activity.

Methylphenidate and other synthetic stimulant medications, such as amphetamine and Adderall, help those diagnosed with ADHD to increase focus, reduce impulsivity, and reduce hyperactive behavior.

Methylphenidate, the active ingredient in Concerta, works by blocking the reuptake of neurotransmitters dopamine and norepinephrine. This mechanism of action also has residual effects.. Massive releases of dopamine cause increased feelings of euphoria that are associated with reinforcement or repeating a particular action or behavior. Dopamine is a neurotransmitter that’s associated in the development of most addictive behavior.1

Drugs that directly increase the availability of dopamine, such as cocaine, methamphetamine, and methylphenidate, are also significant drugs of abuse, and many of these are classified by the United States Drug Enforcement Administration as Schedule II controlled substances. The drugs in this category represent the highest level of control for substances that are available with a prescription from a physician.3 These drugs are considered to have significant potentials for abuse and for the development of physical or psychological dependence. These drugs also have numerous potential side effects and long-term effects; as a result, they can only be safely used under the supervision of a physician.

A systematic review of the scientific literature suggests that college students are at higher risk of non-medical use of CNS stimulants like methylphenidate, with increased risk associated with the following:6

In nearly every survey, college students cited academic motivations at rates of 50-89% as the primary reason for their non-medical use.6 Enhanced academic or work performance was cited by 38-57% for adult non-medical use.6 The evidence does support that those without ADHD may experience a small to moderate cognitive benefit from taking prescription stimulants, however, it also shows that misuse of prescription stimulants by college students is associated with a lower GPA, indicating that it actually hinders academic performance.7

Initial effects, which are usually desired by those misusing the medication, after taking 5-20 mg of methylphenidate include:1

Adverse side effects commonly experienced with methylphenidate include:1,2

Rare but serious adverse effects include:1,2

Concerta is a sustained-release preparation of methylphenidate, which means the drug is released slowly into the bloodstream. This slows the rate of onset of the drug’s effect and lessens the subjective drug effects (both desired effects and side effects) when compared to immediate-release methylphenidate (Ritalin).1

Though its abuse potential may not be as pronounced as other prescription stimulants such as cocaine or methamphetamine, problematic patterns of misuse may develop even with a drug like Concerta. A number of signs can point to a problem with compulsive Concerta use—either alone or in combination with other substances.

Some signs, symptoms, and behavioral changes associated with substance addiction, or a substance use disorder, include:9 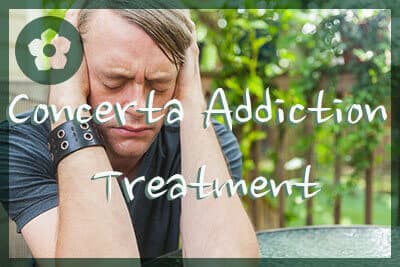 Following withdrawal management, individuals should become involved in a formal substance use disorder treatment program that should include the following components:

Relapses occur frequently, even in individuals who are involved in the most comprehensive forms of treatment. Remaining involved in treatment helps individuals learn from their experiences, develop stronger plans of recovery, and eventually experience success. There’s a strong relationship between successful recovery from a substance use disorder and the length of time that one remains actively involved in treatment-related activities, such that those who remain in treatment-related activities for longer periods of time have far greater rates of success in recovery.

Any individual who has developed a stimulant use disorder as a result of Concerta abuse requires formal intervention and long-term treatment. The potential for successful recovery increases as a result of maintaining involvement in treatment-related activities for years following initial abstinence from Concerta.