IV Drug Use and Disease

Many people who abuse drugs use injectable drugs. The reason to inject drugs, despite all the attendant harms and risks, is invariably to intensify the resulting high. Unfortunately, those who inject drugs may feel they are subjected to a triple stigma: for the drug use in general, for the injectable drug use in particular, and if they have contracted an infectious disease.

However, it is important to understand that numerous medical, mental health, and addiction professionals have dedicated their careers to the compassionate and effective care of those who are seeking recovery services for their substance abuse and treatment for viruses at all different stages of development.

Education is key in the area of IV drug use and the communication of bloodborne diseases. There are at least three ways in which people inject drugs: into a vein (this practice has numerous slang names including shooting and slamming), under the skin (skin popping), and directly into a muscle (muscling).1

Typically, a person who uses injectable drugs will do so into a vein; however, over time, veins can collapse or become infected, which causes a person to seek alternate points of entry—hence under the skin or into a muscle.2 From the perspective of a concerned person, the practice of injecting drugs may be difficult to understand. However, the prevalence of injectable drug use is a testament to how powerfully drugs can hijack the brain, causing people to engage in dangerous activities solely to service the addiction.3

Facts on IV Drug Use 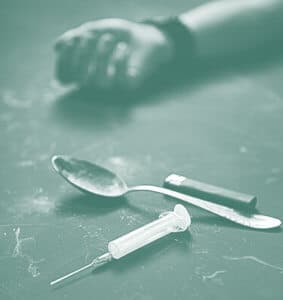 In the U.S., there are an estimated 775,000 persons report having injected a drug in the past year.4 Compared to the general population, individuals who use injectable drugs are at a heightened risk of communicating or contracting an infectious disease, such as HIV and hepatitis, as well as bacterial and fungal infections.5 An estimated 189,600 people who injected drugs had HIV in the 50 states and the District of Columbia at the end of 2016.6

Sharing needles, syringes and other drug injection equipment may not directly be involved in each incidence of disease transmission.6 People who inject drugs may also engage in risky sexual behaviors as well.6

At present, men who have sex with men continue to be at an increased risk of HIV transmission in general, but those who also engage in intravenous drug use face an even increased likelihood of contracting HIV.7

There are many drugs that are commonly injected:8

Citing the half million people using OxyContin non-medically for the first time in 2008, the U.S. Food and Drug Administration approved a new formulation of OxyContin in 2010 that the agency hoped would result in decreased overdose risk as well as less abuse by snorting or injection.10 The FDA encouraged this practice and other opioid drug manufacturers followed suit, reformulating top-selling opioid pain relievers in an effort to curb their abuse.11

These efforts at the pharmaceutical manufacturing level are not abuse- or addiction-proof, but are a step in the right direction – one that may help to lessen the severity of the prescription opioid abuse epidemic.

IV Drug Use and Disease 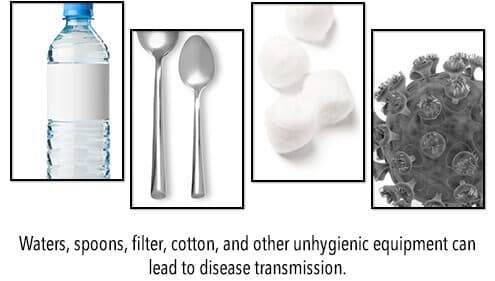 According to the Centers for Disease Control and Prevention (CDC) and the U.S. Department of Health and Human Services, the rates of HIV infection and viral hepatitis are substantially higher among persons who use illicit drugs vs. those who do not.12 These viruses spread through blood or other body fluids.13 The high rates of disease transmission reflects behavioral, social, cultural environmental and structural factors.

Behavioral factors include the use of sharing contaminated syringes, needles and other equipment used for intravenous drug use and often shared among users.12 Disease transmission is also facilitated through unprotected sex, and unsafe sexual behaviors are associated with alcohol intoxication and illicit drug use.12

Social and cultural factors that contribute to transmission of disease includes marginalization, stigma and a lack of social support—factors that often affect those who use drugs illicitly, have a mental disorder, or are members of a sexual minority.12

At the end of 2016, an estimated 1.1 million Americans aged 13 and older had HIV in the U.S. including 162,500 (14%) who were not yet diagnosed.14 HIV is a virus that lowers the number of body’s immune cells making it harder to fight off infections and diseases.13

New HIV infections remain a formidable public health concern. According to the CDC, in 2018, there were 37,832 Americans who were newly diagnosed with HIV. Of this group, 7% were among people who inject drugs.

At present there is no cure for HIV, although antiretroviral therapy medications can help those who have contracted the virus to live longer and healthier lives, as well as reduce the risk of transmitting HIV to others.13

Hepatitis B and C

Hepatitis is an inflammation of the liver that causes painful inflammation and irritation. It’s caused by a family of viruses, A, B, C, D and E. Hepatitis B and C viruses (HBV and HCV) are the most common hepatitis infections commonly transmitted through risky sexual behavior of people who use drugs, particularly injection drug users, or the sharing of equipment involved in using intravenous drugs.15

Antiviral medications are available to effectively treat chronic HBV or HCV infections, and new drugs to reliably cure HCV have been available since 2013. When left untreated, a person with hepatitis may develop cirrhosis, a progressive deterioration of the liver and it can also lead to liver cancer, with 65% of liver cancers related to HBV and HCV infections.15

As injection drug use remains prevalent, it is advisable from a personal and public health standpoint for people to be tested for this virus. In cases where a person is positive and continues intravenous drug use, it is considered best practice to incorporate personal safety strategies to reduce the risk of spreading HBV or HCV. 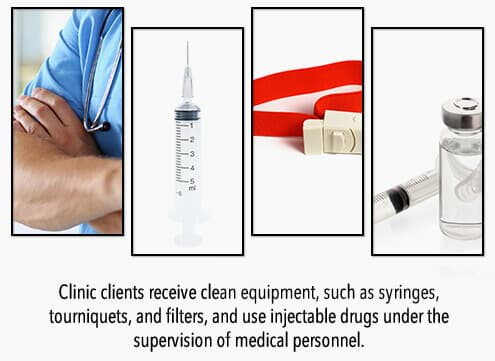 Rather than seeing anything less than 100% abstinence as therapeutic failure, harm reductionists recognize that even mere decreases in substance use behavior can be beneficial to those in recovery. Harm reduction approaches seek to better educate those who use drugs and provide them with improved drug use conditions that keep both the community-at-large safer and healthier.17

Needle exchange programs are some of the clearest and most salient examples of harm-reduction efforts. These community-based programs facilitate the safe disposal of used needles and syringes as well as provide access to sterile needles and syringes.18 They may also provide education about overdose prevention and safer injection practices or screen for viral hepatitis, HIV or other sexually transmitted diseases.18

Although at first glance these programs might seem to encourage substance use, studies have shown that these programs do not cause or increase crime or illegal drug use.19,20 Furthermore, research has shown that needle exchange programs actually help people overcome substance use disorders—people who inject drug and use a needle exchange program are in fact more likely to enter treatment and reduce or stop injecting.18

Although harm-reduction strategies can mitigate risk of infection for people who inject drugs, the risk of contracting HIV, HBV, or HCV can be nearly eliminated for many struggling with injection drug use by receiving comprehensive addiction treatment in a professional setting.

Many addiction treatment facilities provide dual treatment for injection drug abuse and any infections that have developed as a result of drug use. It’s never too late to get help; addiction recovery is always an option.

It’s never too late to reach out for help. Call us today at to learn more about rehab programs in Texas.

Prefer getting help via text?
We're available 24/7 via text message. Signup below for access to our team when its convenient for you!
and many more...
✕
Instantly Check Your Insurance Coverage
Your information is safe & secure
At Greenhouse, we accept most types of private (non-government) insurance and offer a variety of payment options.
You can quickly and privately check your insurance benefits to see if you're covered for addiction treatment services. We’ll be able to tell you if your provider is in network with Greenhouse Treatment Center and all American Addiction Centers locations.
This means your treatment may be FREE1 depending on your policy, copay, and deductible.