What is Lorazepam?  Is it Addictive? 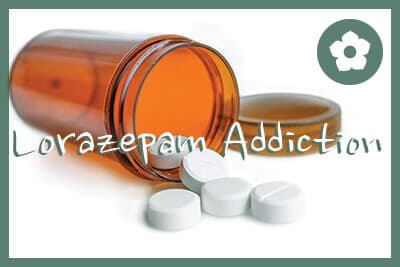 Lorazepam (also known by its brand name Ativan) is a prescription benzodiazepine drug approved for the short-term management of anxiety. It is sometimes used off-label for the treatment of nausea in cancer patients, irritable bowel syndrome (IBS), epilepsy, and sometimes insomnia (though drugs like Ambien have largely supplanted benzodiazepines in the treatment of sleep disorders).

This Schedule IV controlled substance has the potential for abuse and addiction and generally should not be used for periods longer than 4 weeks at a time due to these risks.

Lorazepam (Ativan) belongs to the benzodiazepine class of drugs. These drugs are useful medications when taken for their intended purpose; however, they should be taken with caution due to their potential for physical dependence and addiction.

Even among individuals who use benzos like Ativan as directed, tolerance may develop (a need for increasing doses to achieve a drug’s therapeutic or desired effect) and users may eventually become physically reliant on them just to feel normal (dependence).

For those who abuse lorazepam, the dual phenomena of tolerance and dependence may develop quickly and could contribute to escalating, compulsive misuse of the drug and addiction. For example, someone taking the drug recreationally or taking larger amounts than prescribed may need to continually increase their dose or the number of doses they take in a day. Doing so could result in even more rapidly growing tolerance and place them on a path to severe physiological dependence.

In the United States, benzodiazepines are the third most abused drug behind marijuana and prescription opioids. Lorazepam is a desirable drug of abuse for many people because it can cause a feeling of euphoria in high doses in addition to its calming and sedating properties that may be pleasurable to many.

Like other addictive drugs such as opioids lorazepam is associated with an increase in dopamine release in certain brain regions (although via a different mechanism). Dopamine is the neurotransmitter commonly associated with feelings of reward and plays a role in the development of addiction.

Myth: If It Was Prescribed, It Must be Safe

Those who are prescribed lorazepam may find it to be a lifesaver in many cases. They certainly don’t see any reason why they shouldn’t take it. After all, if a doctor is prescribing it, then they assume it’s safe. However, as noted above, Ativan is only for short-term use, and any misuse of the drug can be dangerous. Even when used as directed, certain side effects are possible, and the risks increase with abuse.

It is impossible for practitioners to monitor exactly how prescribed medications are being used once a patient leaves the office. For instance, though a medication regimen will be detailed clearly in prescription instructions, doctors ultimately are limited in knowing how frequently the medication is used, and in some cases, it may not be clear how long someone has been using lorazepam before receiving a new prescription. In some cases, the issue is perpetuated by a lack of thorough medical oversight. For example, in Oregon in 2013, 1.9 million prescriptions were written for benzos like lorazepam, and 45% of people using them had been refilling the prescription for at least 3 months in a row.

The Substance Abuse and Mental Health Services Administration (SAMHSA) notes that more than half of all individuals who misused prescription drugs during 2012 and 2013 obtained them from a friend or relative for free. These individuals may see getting prescription drugs from a friend or relative as less risky than buying street drugs, but benzodiazepine abuse can just as dangerous as many illegal drugs.

The Diagnostic and Statistical Manual of Mental Disorders (DSM-5) notes that while the more common scenario involves teens and people in their 20s escalating their occasional use of sedative drugs to the point where it is no longer manageable, in some cases, people who are prescribed the drug for legitimate medical purposes develop a problem. Often what happens is that the person receives a prescription to help manage anxiety or another medical purpose and then find that due to a growing tolerance they need to up their dose or how often they take it and do so without consulting their doctor. This may lead to a growing pattern of misuse that they continue to justify based on the persistence of their original symptoms and their perceived medical needs.

Is Lorazepam an opioid?

In this way, benzodiazepines like lorazepam may be abused similarly to opioids, so a common misconception may be that the two are similar or the same drug. In fact, they are very different. Benzos are nervous system depressants that are used to treat anxiety, while opioids or narcotics are pain relievers. Put simply, both are commonly abused drugs but are prescribed for different reasons and have different effects on the body.

It is unfortunately all-too-common for people to abuse benzodiazepines such as lorazepam in combination with opioids such as oxycodone or heroin. Around 90% of people who abuse opiates also abuse benzos like lorazepam.

Polydrug abuse involving benzodiazepines is common among young adults between 18 and 25. Research conducted with participants of club scenes found that benzodiazepines such as Ativan are often combined with alcohol or other drugs to 1) increase the high 2) mimic the effects of other drugs and 3) ease the comedown from stimulants such as cocaine.

The risks that come with abusing more than one drug surpass the already serious risks of abusing one substance. SAMHSA notes there is a 24-55% heightened risk of serious outcomes when benzodiazepines are used along with an opioid painkiller or alcohol than when used alone. The most severe consequence is significant respiratory depression, which can lead those who abuse these drugs to fall into a coma or die. In 2015, nearly a quarter of all individuals who died from an opioid overdose were found to also have benzodiazepines in their systems.

As a group of drugs, benzodiazepines have a significant side effect profile, and lorazepam is no exception. Potential side effects of this drug include the following:

Other acute effects of Ativan intoxication include:

Benzodiazepine intoxication may also lead to serious accidents, such as vehicle collisions or falls. You might also be more likely to engage in inappropriate sexual or aggressive behavior while abusing Ativan. Additionally, you might experience rapid mood changes and impaired judgment that may cause you to engage in dangerous behaviors.

The intensity of the drug’s side effects will be heightened when the drug is used in combination with other CNS depressants. For example, using benzos with alcohol may give you a feeling of a stronger high, but you are far more likely to suffer life-threatening respiratory depression.

For older individuals with specific health ailments, such as chronic obstructive pulmonary disease (COPD), lorazepam may exacerbate respiratory problems and could even increase the risk of developing pneumonia. One study concluded that people with COPD who received a new prescription for a benzodiazepine drug had a 45% chance of their respiratory symptoms worsening to the point of requiring outpatient treatment.

It can often be difficult to admit to yourself that you have a problem, especially if you’ve been prescribed your drug of abuse. The DSM-5 has several diagnostic criteria for a substance use disorder. If you meet 2 or more of these criteria, you may have already developed a Lorazepam  addiction, and would benefit from some form of substance abuse treatment:

Don’t let your addiction reach rock bottom. If you or someone you love is struggling with the devastating side effects of addiction and are unsure of where to turn, call us today at . Greenhouse Treatment Center, American Addiction Centers’ Dallas rehab, is ready to help you get the treatment you need today.

Abruptly quitting lorazepam can bring on withdrawal symptoms, some of which are relatively mild and some that may be serious enough to require emergency medical intervention. Reported symptoms of lorazepam withdrawal include:

For shorter-acting benzodiazepines like Ativan, withdrawal symptoms will typically begin within 6 to 8 hours and peak on the second day. By day 4 or 5, symptom severity is often markedly decreased.

Due to the potential life-threatening complications of Ativan withdrawal, the safety and supervision of a medical detox environment may be required. Medical detox clinics are staffed with doctors, nurses, and other treating professionals who will initiate a slow taper of the substance (or a replacement substance—often a longer-acting benzodiazepine such as diazepam or chlordiazepoxide) to minimize serious risks and reduce your discomfort.

Lorazepam abuse can cause serious problems, both physically and psychologically. If you are abusing it and need help, don’t hesitate to reach out. There’s no better time to ask for the help you need than today.

Prefer getting help via text?
We're available 24/7 via text message. Signup below for access to our team when its convenient for you!
and many more...
Your Next StepsRecovery is possible. We're here to help with your addiction.