Although all of these are normal childhood behaviors, children with ADHD experience them to a more frequent and severe degree that interferes with daily functioning and their own development.2

There are three different types of ADHD:1,2

ADHD is more common in males than females in both childhood onset (12.9% vs. 5.6%) and adult onset.3,4 Females are more likely than males to have predominantly inattentive ADHD.3 It is estimated that approximately 9-10% of American children have the disorder.5 The number of diagnoses is increasing each year.5

Other mental health concerns and conditions, such as learning disabilities, anxiety disorder, conduct disorder, depression, and substance use disorder, are common in people with ADHD.1,3

ADHD and the Risks of Substance Use

Up to 60% of children with ADHD continue to struggle with symptoms of the disorder throughout their teenage years and into adulthood, with studies estimating the prevalence of adult ADHD to be somewhere between 2.5 to 4.4%.6

When symptoms of ADHD co-occur with symptoms of a SUD, symptoms of both disorder are likely to increase, making them more difficult to treat vs. those who have symptoms of only one disorder.6,7

ADHD and Marijuana Use 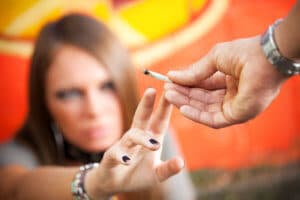 Marijuana is well-known to impair short-term memory, attention, and judgement. Individuals with ADHD are already vulnerable to experiencing these impairments, and marijuana use may actually have an additive effect, thereby worsening many symptoms and furthering impairing the executive function of those ADHD.12

It is perplexing, then, that marijuana use is high in these individuals, and it is further puzzling to see that is an increasingly popular perception that marijuana can be therapeutic for ADHD.11,12 For example, in an analysis of 268 separate Internet forum threads, 25% of people endorsed marijuana use as improving ADHD or symptoms of ADHD compared to only 8% saying it is helpful.11 Further research is needed to fill in the gap and explain the difference between perceived benefit vs. the evidence showing that marijuana likely exacerbates symptoms and puts individuals at risk of worsening ADHD symptoms and a higher risk of developing a cannabis use disorder.

Treatment of Co-Occurring ADHD and Substance Use Disorder

Mental health and addiction treatment professionals acknowledge that treating co-occurring ADHD and SUD is “a formidable challenge.”6 However, there are both pharmacologic and nonpharmacological therapies available to clinicians as they build an individual’s treatment strategy. Which therapies are used and when will depend on a person’s symptoms and their severity, but it is important for both disorders to be treated simultaneously, as they so closely affect each other.6

If you have been diagnosed with ADHD, or if you have symptoms of ADHD, and are struggling with marijuana or other substance use, quality treatment and innovative individualized care is available. There’s no reason to continue putting your physical and mental health at risk when treatment is available. Contact us at 972-846-8995 to discuss your options.

herbalmarijuana
Ready to get started?
We're available 24/7 to answer questions and help you make decisions about starting recovery.
Your Next StepsRecovery is possible. We're here to help with your addiction.