Today, the word yoga conjures up images of fit people stretching into contortionist-type poses, but that’s just one extreme on the spectrum of this widely-practiced, healthful activity. In the United States, yoga is primarily conceptualized and practiced as a form of exercise, self-healing, and relaxation. Toward these ends, yoga helps many people. 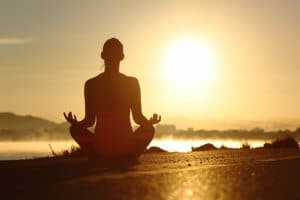 As the practice of yoga grows, there is subsequently a greater awareness of the health benefits it offers. To understand how popular yoga really is in the U.S., consider the following facts and statistics:1

Findings such as these suggest that Americans who practice yoga are among the most fitness-oriented. As one good habit often begets others, practicing yoga could open a door into an overall healthier way of life.

Yoga may have particular benefits even when compared to certain other types of exercises—and such effects aren’t limited to physical health. One study found that yoga may lead to a relatively greater improvement in mood and decreased anxiety compared to walking, for example.2

In view of the popularity of yoga and research evidence that supports its positive effects on health, it is no surprise that it is being incorporated as a therapeutic tool in a number of settings. Yoga is now practiced in senior citizen communities, prisons, workplaces, and drug rehab centers. According to an illuminating article on yoga therapy and drug recovery in Social Work Today, yoga can be a highly effective client-centered form of therapy used alongside more traditional forms of substance abuse treatment.3

The term yoga therapy refers to the application of yoga in a clinical setting. Yoga therapy can occur as an adjunct treatment during rehabilitation (both inpatient or outpatient) and during the aftercare process.

Many in the field of behavioral health agree that yoga therapy can complement the main pillars of mental health treatment and, potentially, substance use disorder treatment (i.e., behavioral therapies and medications, when applicable).3

Yoga as an Element of Aftercare

Following an initial period of rehabilitation for substance use disorders, common approaches to aftercare may include:

For many, the substance recovery process does not end after completion of a structured inpatient or outpatient rehab program. In the grander scheme of treatment for these chronic conditions, aftercare efforts may constitute the longest phase of recovery; in fact, they may continue to provide recovery support indefinitely.

Aftercare is not a defined program. Rather, an individual aftercare plan is commonly composed of different services and activities that all support recovery. Consistent aftercare efforts can help a recovering person avoid relapse and best maintain a healthy body, mind, and lifestyle.

Many aftercare strategies, it should be noted, depend on external factors. That fact doesn’t undermine the aftercare process, but it can also be empowering for an individual to be able to reach within for a tool to support recovery, anywhere and anytime.3 Yoga is by its nature a self-involved process. As mentioned, the practice of yoga can help a person to develop healthy habits, such as better nutritional health. Yoga, in short, can help people to take greater care of themselves.

Yoga, as part of an aftercare plan, can occur in different settings. A recovering person may have a blended practice where they do yoga at home (with or without the aid of a video or audio recording) and in a studio setting with other practitioners. Doing yoga in a group setting opens the door to workshop opportunities and retreats.

Many instructors are aware of the positive impact that yoga can have on individuals in recovery from addiction.

For individuals who are planning on going to rehab, in rehab, or have started the aftercare process, living a drug-free life may seem like a big challenge. This is the exact reason why a solid and effective aftercare process is helpful. Yoga, as well as education about its principles, can help promote the changes in an individual’s mind and body that will themselves support recovery.

Yoga is a practice. Dramatic change may not come overnight, nor should it. Yoga can support a gradual but profound shift in a person. Ongoing recovery gives a person distance from substance abuse and enough time for healthy new behaviors and thoughts to take shape. Yoga as a tool and adjunct to treatment can do its part in promoting these healthy changes.