There are many psychiatric drugs prescribed to treat numerous mental and behavioral health conditions.

These drugs may be therapeutic for people when used as directed. However, many psychiatric medications have a strong potential for abuse or addiction. 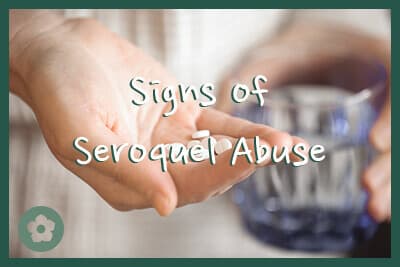 Stimulants and sedatives are common drugs of abuse.  Less commonly misused are antipsychotic drugs prescribed to treat schizophrenia and bipolar disorder, like Seroquel.

Seroquel as a Drug of Abuse

What Are the Signs of Seroquel Abuse?

While Seroquel can trigger side effects in people who take the drug as prescribed, a person who abuses this substance may be more likely to experience side effects.5

Physical side effects associated with Seroquel4,5

Someone who abuses Seroquel may crush and snort the drug, or they may mix it with water and inject it intravenously. These are extremely dangerous practices that can quickly lead to overdose.

Signs that someone is abusing drugs in this manner include redness or dryness around the nose, constant sniffing or nasal congestion, sore throat, hoarse voice, and coughing.

Signs that someone abuses Seroquel through intravenous injection include skin infections at the site, track marks, and paraphernalia like rubber hoses, needles, and dirty spoons.1,4,5

Another sign that a person may be abusing Seroquel is tardive dyskinesia (TD) or extrapyramidal effects (EPS). The signs of TD are jerky, uncontrollable movements, often starting in the jaw, lips, and tongue. Someone with TD may appear to be chewing or grinding their teeth. EPS signs include restlessness, physical tremor, and stiffness.5

Mental side effects associated with Seroquel:4,5

Other signs of prescription drug abuse, including abuse of Seroquel, may include needing frequent refills, stealing the drug, stealing money for the drug, or experiencing financial, legal, or social ramifications due to being intoxicated.

Substance abuse may not only harm a person’s mental and physical health, but can damage personal relationships with friends and family, make work or school more difficult, and can ultimately lower quality or enjoyment of life.

Overdose or toxicity may be more likely if the drug is taken in larger doses than prescribed.

Although abuse of Seroquel is rare, it can be very dangerous. If you are abusing Seroquel, get help from an addiction specialist to safely taper off this medication and then enter a rehabilitation program that provides evidence-based therapy to change behaviors around prescription drugs or illicit substances.

Don’t let your addiction reach rock bottom. If you or someone you love is struggling with the devastating side effects of addiction and are unsure of where to turn, call us today at . Greenhouse Treatment Center, American Addiction Centers’ Texas rehab treatment facility, is ready to help you get the treatment you need today.

Brittany Tackett is a transformational life coach, writer, and speaker in the mental health field. She holds a Master's in Psychology with specialization in Transformational Life Coaching, as well as an International Certificate in Behavioral...

substance abuse symptoms
Prefer getting help via text?
We're available 24/7 via text message. Signup below for access to our team when its convenient for you!
and many more...
✕
Instantly Check Your Insurance Coverage
Your information is safe & secure
At Greenhouse, we accept most types of private (non-government) insurance and offer a variety of payment options.
You can quickly and privately check your insurance benefits to see if you're covered for addiction treatment services. We’ll be able to tell you if your provider is in network with Greenhouse Treatment Center and all American Addiction Centers locations.
This means your treatment may be FREE1 depending on your policy, copay, and deductible.
Your Next StepsRecovery is possible. We're here to help with your addiction.