Seroquel is the brand name for an atypical, second generation antipsychotic drug called quetiapine.1 As a prescription medication used to treat serious mental illnesses like bipolar disorder and schizophrenia, qutiapine is a valuable pharmaceutical tool used by practitioners to mitigate certain mental health symptoms and improve the wellbeing of their patients.2″

Despite the many benefits of Seroquel (quetiapine), the drug carries a risk of side effects and some danger of lasting health consequences. Like many other psychoactive prescription medications, there is emerging evidence to suggest Seroquel is sometimes misused.1 Although the drug’s use is generally safe, it is valuable to know and understand the possible repercussions of use in order to keep yourself and your loved ones safe.

While Seroquel is generally a safe drug, there have been reports of it being abused. If you’re using Seroquel in ways other than prescribed, you may be at risk for overdose.

Common/Short-Term Side Effects of Seroquel

Unfortunately, Seroquel has many unwanted side effects that can present even in people who take the substance as directed. Some may resolve over a few days while others have the potential to persist throughout the duration of treatment. 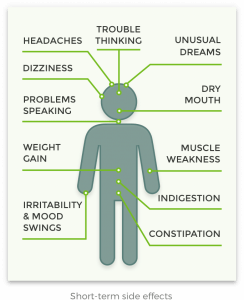 Common, short-term side effects of Seroquel may include:3

Seroquel may also be associated with certain hormonal changes, resulting in side effects such as:3

Rare/Serious Side Effects of Seroquel

Seroquel use is sometimes associated with more serious side effects, including:3

As with other drugs, Seroquel may be more likely to have adverse outcomes in people who abuse the substance. Often in these scenarios, dosing is not able to be supervised or adjusted, nor is a medical professional able to monitor or respond to an individual’s ongoing health status adequately. 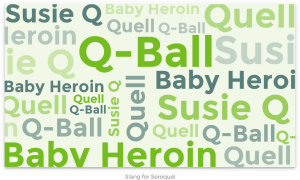 Though Seroquel has known pharmacotherapeutic uses, is not a controlled substance, and is not generally considered to have a high potential for abuse or addiction, there have been reports of the medication being misused or abused. It is sometimes abused in combination with cocaine.2 The combination of Seroquel and cocaine is sometimes called a “Q-ball.”2

Other potential slang or street terms used to refer to Seroquel as a drug of abuse include:1

While rates of Seroquel abuse are low on the whole, there have been reports of people abusing it various ways—via oral route, by crushing and snorting it, and by injecting it.1

There is debate about why Seroquel, more than other antipsychotics, tends to be abused; however, some hypothesize that the sedating effects play a part.1

A study found that Seroquel was the only atypical antipsychotic drug to be somewhat desirable on the street. One dose of Seroquel has a reported street value of between $3 and $8 for a 25 mg pill.1

Seroquel abuse is likely to be more prevalent in prison and inpatient psychiatric populations. In these settings, people have been reported to feign psychotic symptoms like hallucinations or delusions to obtain Seroquel prescriptions from staff.2

Over time, especially if abused, Seroquel can lead to the development of several adverse, and potentially long-lasting side effects. In some instances, these effects are reversible when use of the drug ends, but in other situations, the changes can be permanent.

One of the most commonly reported side effects is weight gain.4 Over time, excess weight can harm the heart, lungs, stomach, liver, pancreas, and other organs. While many people gain weight while taking Seroquel as prescribed, the result isn’t inevitable. Some are able to remain within a healthy weight by following their doctors’ orders regarding a healthy balance of diet and exercise.

Along with the added weight, Seroquel carries a risk of other metabolic problems like increased blood sugar.4 There is a link between using Seroquel and diabetes diagnoses. The high blood sugar associated with Seroquel can, in some cases, be extreme and lead to a precipitous drop in blood pH levels (ketoacidosis), coma, or death.

Signs of persistent hyperglycemia (high blood sugar) may include:4 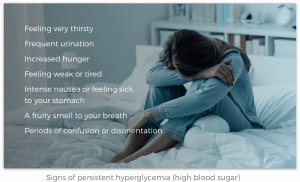 High cholesterol can also be harmful, increasing the risk of strokes or heart attacks. Having high cholesterol and blood pressure is often associated with being overweight or having an unhealthy life style. Abusing Seroquel puts one at risk of developing these conditions related to weight gain.

Seroquel may be associated with other long-term physical effects including the following:

Is Seroquel Safe for the Elderly?

Certain populations may be at even greater risk of Seroquel-associated adverse events. For instance, when used in elderly people with dementia-related psychosis, Seroquel increases the risk of stroke and death from heart failure or infections like pneumonia.4 Due to these serious hazards, this population should only use Seroquel when no other options exist.

While it is possible to overdose on quetiapine, the likelihood is quite low. People have consumed 30 grams of the drug and survived.4 This amount is very large considering the maximum dose of Seroquel is 800 mg daily for most people with bipolar disorder and schizophrenia and only 300 mg daily for people as an adjunctive treatment for depression.4 Despite this relatively large index of safety, taking larger than recommended doses of the medication is never advisable.

A Seroquel overdose may result in unwanted effects like:4

Although very rare, overdose could result in coma and death in some individuals.4

There is no Seroquel overdose antidote, so anyone who may have overdosed should contact emergency services or present to the nearest emergency room immediately. Once there, the staff will focus on airway support, ventilation assistance (if needed), and clearing the GI tract of any remaining Seroquel through gastric lavage, administration of activated charcoal, and laxatives.4

Depression, bipolar disorder, and schizophrenia are serious mental health conditions which can severely decrease a person’s quality of life. Overall, Seroquel has the ability to greatly improve the mental health of children, adolescents, and adults with various psychiatric issues.

Sadly, Seroquel can also negatively influence someone’s mental health and well-being just as it can impair their physical health. The drug has the ability to impair judgment, reduce decision-making skills, and alertness.4 For these reasons, someone using Seroquel should avoid situations where they could endanger themselves or others like when driving a car or operating machinery.

Suicidal thoughts and behaviors are another significant psychological effect of Seroquel to be aware of. People with a major depressive disorder who begin using Seroquel may report an increase in depression, which may result in suicide.4 This pattern has occurred in adults who use Seroquel, but the trend seems more prevalent in people 24 years of age or younger than in older adults.4

Suicidal ideation has occurred in some children, teens, and young adults who use Seroquel. Young people who suffer from depression or another mental illness and who abuse Seroquel recreationally may be hesitant to disclose their symptoms to a doctor for fear of getting in trouble and may not get the proper treatment.

Does Seroquel Cause Withdrawal Symptoms?

Many prescription and illicit drugs are associated with certain withdrawal symptoms when use is stopped or drastically reduced after the body has become accustomed to the substance’s presence in the body. 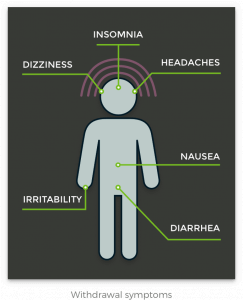 Seroquel withdrawal may include symptoms such as:4

These Seroquel withdrawal effects are uncomfortable, but they are a normal and expected part of the process. The symptoms will usually alleviate within a week of last use.4 Slowly lowering the dose under the care of a doctor can minimize any withdrawal discomfort.4

Using Seroquel as directed can drastically improve mental health and wellbeing, but it can also trigger some significantly negative side effects and long-term consequences. Though abusing Seroquel may be rare, it can also increase the harm in a number of ways. Long-term abuse may increase the risk of serious, chronic health issues.

If you or a loved one are abusing Seroquel or experiencing unwanted effects from the substance, it is important to let a professional know. Getting help to switch to another medication or to overcome abuse of this psychiatric medication can dramatically improve your quality of life.

Disclaimer: This is not a complete list of side effects and others may occur. Call your doctor for medical advice about side effects.