Prescription sleep medications aren’t typically associated with a potential for abuse and dependence. They were, after all, originally marketed as safe alternatives to habit-forming benzodiazepines. But there have been many cases of reported misuse, abuse, dependence, and also death involving Ambien and similar medications reported over the last decade or so.1

Ambien, also known by its generic name zolpidem, can induce complex behaviors during sleep that result in potentially dangerous situations. When co-ingested with alcohol, opioids or benzodiazepines, the drug’s hypnotic effects are amplified. One study of Ambien misuse showed that hospital admission was common when it was ingested with other medications.2

The Dangers of Snorting Ambien 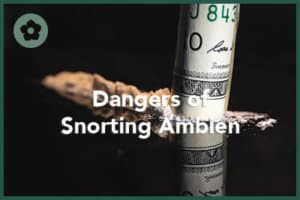 Ambien is available as an immediate release or extended release tablet, which is meant to be swallowed and absorbed through the body’s gastrointestinal system. It is meant to be taken right before bedtime and is more effective when taken on an empty stomach. The active ingredient in Ambien tablets, zolpidem, is also available for administration under the tongue (brand name Edluar) as well as an oral spray (brand name ZolpiMist).

Ambien tablets should not be crushed up and the powder swallowed or administered under the tongue or by insufflating it through the nose (aka “snorting”).

Ambien tablets are specifically designed to be administered orally, and snorting Ambien has been associated with reports of adverse drug reactions,1 tablets contain filler particulates are dangerous and could cause inflammation of the nasal lining, and blockages or infections in the lungs, nasal airways and respiratory tracts.

ambieningestionsleeping pillssnorting
Ready to get started?
We're available 24/7 to answer questions and help you make decisions about starting recovery.
Your Next StepsRecovery is possible. We're here to help with your addiction.