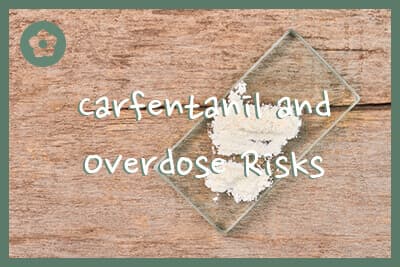 Carfentanil is a highly potent opioid drug, one that’s stronger than heroin and all currently available prescription opioid medications.1 It’s estimated to be 10,000 times more potent than morphine.2 Carfentanil has no legitimate medical use in humans but is used by veterinarians to sedate and immobilize large animals.2 Humans can easily overdose on carfentanil or any other fentanyl analogue after taking only very small amounts.2,3

There is a high risk of overdose when users take heroin that has been unknowingly cut with carfentanil. Outbreaks of carfentanil-laced heroin have been detected since 2016, causing deaths in several states, more notably in Ohio, Maryland, Pennsylvania, and Florida.2,3

The Drug Enforcement Administration (DEA) has found both fentanyl and carfentanil mixed with heroin, presumably to increase its potency. This practice is risky for both drug dealers and buyers, who may not know exactly what’s in their heroin. Many people underestimate the potency of these dangerous drugs.

Fentanyl is a powerful synthetic opioid that’s 50-100 times more potent than morphine.4 It’s used to manage pain in patients who have developed a tolerance to other, more commonly prescribed painkillers.4

Like fentanyl, an overdose of carfentanil may require multiple doses of naloxone, the opioid reversal drug that has saved many people from dying from an opioid overdose. Fentanyl and illicitly managed fentanyl, however, bind to large numbers of opioid receptors, many times out-competing naloxone, rendering it less effective in reversing an overdose caused by more potent opioids.7

Carfentanil works on the same opioid receptors in the brain as many other opioids. Although there is little research on its effects in humans, its stronger potency means that the effects of this drug are likely similar to those of weaker opioids, including fentanyl, but the increased potency means they are amplified.8 General effects of opioids include:

A person who obtains heroin on the street is taking an enormous risk. A batch of heroin that contains more potent opioids than the user is used to, like carfentanil, can result in overdose.1

When someone takes too much of an opioid, suppression of the central nervous system occurs, especially in the respiratory system.9 The lack of oxygen and blood flow to the body and brain can be fatal if the user does not receive immediate medical attention.9

Symptoms of opioid overdose include:10

If you suspect that someone is overdosing, call 911 immediately. An opioid overdose is a serious, life-threatening medical emergency.

Treatment for Opioid Use Disorder

If you or a loved one suffers from an opioid use disorder or addiction to carfentanil, heroin, or even prescription opioids, the situation is frightening and may appear hopeless. However, there is help is out there. Treatment programs are available that help people like you or your loved one recover from opioid addiction and maintain lasting recovery. Don’t become another overdose statistic—get help today.