Codependence, as it pertains to addiction, commonly refers to a specific type of dysfunctional relationship in which a family member (or multiple members of the family unit) enables the active addiction.1 While codependency is not a distinct diagnosable mental health condition in the most recent Diagnostic and Statistical Manual of Mental Disorders (the DSM-5), its potential inclusion as a personality disorder was once proposed.2 Despite this, the concept of codependence continues to be used by many in the treatment community to describe an unhealthy relationship pattern, and codependency continues to be a commonly referenced concept (for example, by those active in Alcoholics Anonymous and other 12-step programs).

The American Society for Addiction Medicine describes codependence as a family member’s harmful over-involvement with the addiction process.1 In some cases, this might entail a tendency toward over-concern with the wellbeing of others to the detriment of oneself—physically, emotionally, or spiritually.4 According to the Substance Abuse and Mental Health Services Administration (SAMHSA), people who exhibit codependent patterns of behavior may be controlling of those they feel are incapable of taking care of themselves, have low self-esteem, and tend to deny their own feelings. They may also remain loyal to those who do little to earn such loyalty, be oversensitive to disruptions in the family, and compromise their own values to avoid anger and rejection.3

Though the term has grown to increasingly widespread use over the years, the concept of codependence has not been universally endorsed. Some have argued that it pathologizes otherwise normal, caring responses—such as empathy and self-sacrifice.3 Originally, the concept of codependency took shape amongst treatment professionals referring to the behavioral patterns of the spouses of alcohol abusers, though the term was eventually expanded to describe a dysfunctional family dynamic seen in people with other types of addictions, as well as any other behavioral or mental health problem.3,5

What are the Signs & Symptoms of Codependency? 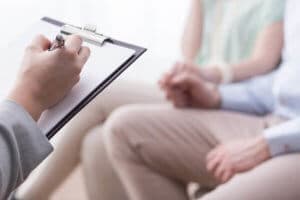 Co-Dependents Anonymous (CoDA), a support group fellowship that adheres to the 12 Steps and 12 Traditions in guiding its members toward healthier relationships.  To better explain the concept of codependency, as well as to provide a means of self-evaluation, CoDA outlines a checklist of several behavioral patterns and characteristics commonly exhibited by codependent people, including denial, low self-esteem, compliance, control, and avoidance. Though individual cases will vary, some characteristic behaviors commonly displayed within each of these patterns include:6

Addiction and Codependence: Am I Enabling My Addicted Loved One?

According to an article published by American Family Physician, codependence is a behavioral characteristic sometimes exhibited by people attempting to fulfill a helpful role in a relationship with someone with a severe illness (e.g., substance addiction). At some point, as standard boundaries begin to weaken, such a relationship becomes harmful to one or both of the involved individuals.7 Codependency may develop as people struggle to cope with a stressful family situation involving such as addiction or mental illness. Codependent people grow to unconsciously fear the potential for ensuing anger and abandonment from the struggling individual should they refuse to accommodate their demands. Such situations may make it more likely that family members adopt unhealthy helping roles.7

Though there are different types of enabling behaviors, codependence of all sorts may ultimately end up hurting each person involved in the relationship. For example, a codependent person might enable someone suffering from addiction to continue abusing substances by shielding from or compensating for the consequences of the addicted individual’s problematic behaviors. A more hostile enabler might treat an addicted person with disrespect or aggression over the same types of problematic behaviors.1 Neither instance of enabling has a good chance of helping to motivate the addicted person toward seeking treatment or recovery help, meaning that the addictive behavior may persist and the dysfunctional family dynamic may be further perpetuated.

How to Treat Codependency

A cycle of codependence and addiction creates a relationship in which neither individual is encouraged to recover from their respective issues. Addiction is maintained, and the unhealthy thoughts and beliefs of the codependent person are not addressed. Because this relationship pattern is common among the families and loved ones of people suffering from addiction, treatment for substance use disorders often includes recovery support for the family members themselves.1

Counseling for everyone caught in this cycle of codependence can better encourage recovery from addiction, as the enabling behaviors of the codependent person are recognized and addressed. Psychological and interpersonal struggles such as codependence are sometimes addressed through psychotherapy, also called talk therapy.

Family-focused therapy is also commonly employed and can be very helpful for people in codependent relationships, as the entire family unit is typically affected by unhealthy relationship patterns. Family-focused therapy treats mental health disorders by repairing and strengthening relationships between family members, and teaching healthy ways to communicate wants and needs so loved ones can support an individual who is suffering without falling into unhealthy patterns, such as codependency.3

Codependency recovery support, including the Al-Anon and Nar-Anon Family Groups fellowships, as well as Co-Dependents Anonymous, or CoDA, can help people begin to adjust their focus from the addicted individual in their lives to place more emphasis on caring for themselves. Many people find self-help methods and support networks like CoDA—and their emphasis on allowing the addicted person to learn to better deal with the consequences of their drug and/or alcohol use—to be very helpful in dealing with codependency.1,3 Such groups allow the addicted individual to begin working on themselves while maintaining a connection to much needed family support throughout the recovery process.1