What Are the Signs of Heroin Abuse?

Heroin is one of the strongest and most instantly addictive substances that is known to exist, according to Seattle’s KUOW. The drug was responsible for almost half of the drug-related deaths in America in 2014, and it has been behind daily overdoses across the entire country for the last few years. Recognizing the signs of heroin abuse is critical for first responders, family members, and friends to help people who are falling prey to heroin abuse and addiction.

Heroin Background and Use

Heroin is derived from the resin of poppy plants. The sap of the plants, opium, is removed from the pod, refined to make morphine, and then refined again to produce different kinds of heroin. The heroin that is most widely abused in the United States is injected, either into a vein or a muscle; however, smoking and snorting heroin are still popular methods of getting high. But intravenous use of heroin is as widespread as it is because the effects of the opioid are more quickly and powerfully felt if the drug is sent into the bloodstream as opposed to through the lungs.

Injecting heroin requires the use of certain objects; hypodermic needles for the injection, cotton balls (for straining), a spoon (to liquefy the drug), a source of heat (usually a candle or a lighter), and a belt, rope, or shoelace to tie around the arm to make the vein stand out. The presence of these items is a strong indicator that a person is using heroin, as are the telltale track marks of needle injections on the arms. In an attempt to avoid detection, some users inject in the spaces between their toes, into their buttocks, or wherever people are unlikely to suspect an injection point. A person with visible track marks, or who goes to great pains to conceal parts of their body that might show injection scars and sores, could be trying to hide evidence of a heroin habit.

Opioids and the Opioid System

Heroin works by the opioid molecules in the drug attaching to and activating the opioid receptors in the brain and central nervous system. The body’s natural opioid system has multiple roles to play in a number of vital functions in the body and brain, including the regulation of pain, the feelings of reward and anticipation, and even behavior. In and of itself, this is not a bad thing; the opioid receptors are activated when taking prescription painkillers, so patients in distress don’t feel pain. For millennia, people in Central and Southeast Asia chewed, smoke, and drank products derived from poppy plants for mild pain relief and religious rituals.

Even when the body produces its own endorphins, those endorphins bind to the opioid receptors. That is the mechanism behind a runner’s high, where athletes persist despite the physical strain. It helps us remember positive events, and it compels us to seek them out again and to behave in such a way that we can experience those sensations again.

But heroin is much stronger than a poppy plant or an endorphin. Heroin molecules overwhelm the opioid receptors, giving users a supernatural boost of positivity, reward, pleasure, and satisfaction unlike anything they have ever experienced before. It makes every kind of recreational pursuit seem insufficient by comparison. Recovering users have described thinking that if heroin feels so supremely good, then there can’t be anything that bad about it. So, they continue using, exposing the opioid receptors in their brain and central nervous system to more and more blasts of heroin until they completely lose interest in feeling good in any other way. They can’t imagine that anything else compares to heroin.

Some Signs of Heroin Abuse

A loss of interest in obligations (e.g., familial, social, academic, professional, etc.) is a hallmark of most kinds of substance abuse, and heroin is no exception. Users have reported withdrawing from spending time with loved ones or doing things they once enjoyed doing because getting heroin becomes of paramount importance. Once on heroin, they have little interest in doing anything else.

One reason for that is that heroin causes users to feel incredibly lethargic and drowsy, as though on the cusp of falling into a very deep and solid sleep. WebMD describes how some users feel as though they’re in a very pleasant dream, where their physical pain or emotional distress cannot hurt them. Being in this state becomes utterly compelling for addicts, so a person who appears to be on the verge of sleep all the time (to the point of nodding off during a conversation without waking up immediately afterwards) might be displaying this sign of heroin use. Of course, there are dozens of reasons why a person could be tired all the time, but if this behavior is noticed in conjunction with a loss of interest in spending time with friends or family or a drop in performance at school or work, then the possibility of heroin use must be taken into consideration.

The narcotic effects of heroin also affect concentration and focus. People who have a hard time communicating properly, or even coordinating their muscles and their limbs, might be showing a sign of heroin abuse, especially if this had never been a problem before.

One of the signs of heroin abuse is that users have constricted pupils, a side effect of opioid consumption. Opioids stimulate the parasympathetic nervous system, which controls the circular muscle. When under the effects of heroin, the circular muscle constricts, making the pupils look small (a condition known as miosis).

If someone has pinpoint pupils, this is another sign of possible heroin use. Most other drugs cause the pupils to enlarge. This difference is key when it comes to withdrawal, overdose, and saving a user’s life. First responders need to immediately know what drug caused the medical emergency, and seeing the status of the patient’s pupils – constricted or dilated – will alert them to the drug responsible for the loss of consciousness and indicate the best way the patient should be revived.

Being on heroin might feel wonderful at first, but the drug quickly exacts a painful physical toll on users. The Therapeutic Advances in Chronic Disease journal noted that as many as 90 percent of people who use opioid-based drugs like heroin experience constipation, a combination of one or more of the following:

People who have opioid-induced constipation as a result of their heroin use can develop bowel obstructions, which can become very serious health problems. Heroin slows down activity in the central nervous system, which users find enjoyable (the feeling of being in a dream); however, this reduction in CNS activity also means that what should be a simple physiological process – stool moving through the gastric system – is now an uncomfortable, slow, and unhealthy experience. Heroin decreases the contractions in the intestines that are needed to move digested food through to the waste system. Reduced and painful bowel movements could be a sign of a heroin problem, especially if a person has not had any digestive or excretory problems in the past. 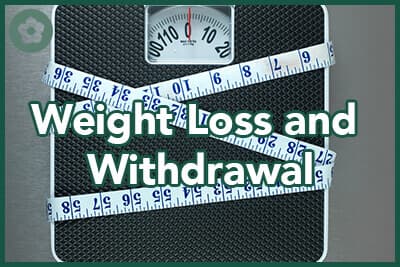 Opioid-induced constipation also causes heroin users to lose weight. Not only does even the act of eating fall outside the necessity of procuring heroin and being high, but the constipation dissuades users from maintaining a healthy or even basic diet.

Heroin actively suppresses appetite, leading users to develop an emaciated appearance. Such drastic physical changes are a clear sign of a health problem. If other symptoms are evident to a degree, then unexpected weight loss, loss of appetite, and a general decline in physical health due to a lack of food could reasonably be attributed to heroin abuse.

Heroin chemically takes over the brain and central nervous system, forcing its way into the parts of the brain that are responsible for regulating everything from mood and emotions to the perception and anticipation of rewards. If a user tries to quit heroin or cannot score another hit for a period of time, the starved opioid receptors are finally able to send neurochemical messages from the brain and CNS to the rest of the body. But, the messages are confused and frantic, with multiple body systems desperately trying to balance themselves without the heroin molecules that had been dictating terms.

For a user, the result of this instability is what is known as withdrawal – painful and distressing symptoms that are so dreaded, many users would prefer to risk being on heroin to avoid experiencing them. If a person refuses to stop their heroin habit out of fear of withdrawal, this avoidance is a sign that what once might have been mere experimentation with heroin (dangerous enough on its own) has become continued abuse of the substance.

Symptoms of withdrawal can depend on the nature of the abuse (how much heroin was being taken and for how long), as well as other factors (age, genetics, lifestyle, mental health, and the presence of other drugs). Generally speaking, withdrawal has physical symptoms and psychological symptoms. A person attempting to quit heroin cold turkey might experience some or all of the symptoms, which is in itself a sign of heroin abuse.

Physical withdrawal symptoms include bone and muscle pain, sleep disruptions, diarrhea, flu-like symptoms, and uncontrollable yawning (not necessarily due to tiredness but because of an involuntary reflex). Psychologically, users experience severe depression and a desperate craving to go back on heroin, mostly out of a desire to alleviate the symptoms.

Heroin withdrawal is not life-threatening, but the ache to go back to heroin can be overpowering, causing many users to not just relapse, but to increase their intake because of how debilitating the symptoms can be. This increase can be dangerous, with users often pushing their consumption to the point of overdose.

For these reasons, quitting heroin should not be done alone, and it should not be done without medical supervision. The doctors and staff at a hospital or treatment center can administer medications, including milder opioids, to gradually wean a person off heroin and mitigate the most severe withdrawal symptoms.

Being aware of the signs of how heroin use presents itself – everything from track marks to constricted pupils, constipation, and nodding off – can help friends and family members identify the possibility of a loved one using heroin as early as possible. This kind of observation and attention to detail could easily mean the difference between the start of a successful recovery and a long descent into unchecked heroin addiction.