Is Peyote an Addictive Substance?

Peyote is a small cactus plant that contains a psychoactive hallucinogenic known as mescaline.1 Mescaline is the main psychedelic compound in the cactus.1 Mescaline can either directly consumed or extracted from the peyote plant or produced in a lab synthetically.1

Though peyote and many other hallucinogens are not associated with significant physical dependence, repeated use can quickly lead to tolerance, necessitating increasingly large doses to feel anything Though many hallucinogenic drugs have less pronounced rewarding effects than those associated with more commonly abused substances like alcohol or opioids, compulsive or problematic use of peyote may be part of what’s known as a hallucinogen use disorder.”2,3,4

Where is Peyote Found?

The peyote cactus grows in the American Southwest and Mexico.3

On the street, peyote goes by various names, such as:1

Generally, no. Peyote is a Schedule I controlled substance, making its use illegal in the United States. However, an exception is made for religious ceremonies conducted by Native American Church members.1,5

The History of Peyote 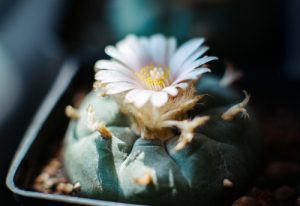 Peyote is one of the oldest known psychedelic drugs.  Here are some highlights of its history:

What Are Peyote Buttons?

When peyote is prepared, the “buttons” that grow from the cactus are cut at the root. The buttons are then dried and can be chewed or soaked in water to create an intoxicating, drinkable liquid.1

This peyote plant extract is extremely bitter, so some users will boil the buttons for several hours to create a tea.3

Some individuals who use the substance will grind down the dried buttons to make a powder that they can add to tobacco or marijuana and smoke.1

Peyote is a classic hallucinogen, and its effects will be somewhat similar to other drugs in the same class such as LSD or “magic mushrooms” (psilocybin).1, 3

Peyote Effects On The Brain

Peyote use results in visual or auditory hallucinations.3 The drug can produce a phenomenon known as synesthesia, where an individual may experience alterations in perception such as hearing colors or seeing sounds.8

Other potential short-term psychological effects include:1,9

Peyote can have physical side effects in addition to its profound psychological effects. These may include:1,4 ,9

When someone uses peyote, the effects usually begin within about 30 to 45 minutes and peak within 2-3 hours. The effects will usually resolve within 8 hours. 4  While some people may experience desirable effects, others may have what is commonly referred to as a “bad trip.”

A bad trip is a frightening period of intoxication wherein the user may have scary hallucinations, anxiety, paranoia, confusion, panic, terror, and/or other troubling experiences. Some individuals will experience extreme fear or feel as if they are losing control.3, 4  Bad trips appear to be more likely in those who have little to no prior experience with hallucinogens but can happen to anyone at any time.3

Are There Long-Term Effects of Peyote Use? 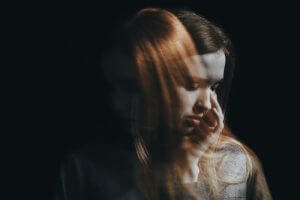 The long-term physical and psychological side effects of peyote have not been extensively investigated; however, it is known that just one use can produce some negative long-term effects in some users.

Even when a person isn’t on the drug, the person may hallucinate, or have a “flashback.” The occurrence of flashbacks is known as hallucinogen persisting perception disorder (HPPD).3

Though extremely rare, hallucinogen use may also lead to persistent psychosis, characterized by:3

Persistent psychosis and HPPD can sometimes occur together, according to the National Institute on Drug Abuse.3

Can a Person Become Tolerant to or Dependent on Peyote?

While peyote does not appear to be associated with physical dependence, a person can certainly use peyote compulsively despite the negative consequences, which is the hallmark of addiction. The inability to stop using hallucinogens such as peyote is referred to clinically as a hallucinogen use disorder.  Signs and symptoms of such a substance use disorder include:2

How Common Is Peyote Use?

While prevalence data that specifically relates to peyote use is somewhat lacking, there is data on hallucinogen use in general. The Substance Abuse and Mental Health Services Administration (SAMHSA) conducted a National Survey on Drug Use and Health in 2018. The survey revealed that nearly 5.6 million people used hallucinogens within the last year, which is an increase of nearly half a million from 2017.10

If you or someone you love is experiencing problems related to compulsive peyote use, other hallucinogens or any other drug, we are here for you. Greenhouse Treatment Center’s team of licensed, empathetic, qualified staff can help you attain recovery and learn the skills you’ll need to sustain it once you leave our doors. Call us at to learn more about rehab treatment in Dallas, TX at Greenhouse Treatment Center.