What Is Seroquel? Is It Addictive?

Seroquel is the brand name of quetiapine, an atypical antipsychotic drug approved by the U.S. Food and Drug Administration (FDA) to treat schizophrenia and bipolar disorder.

It may also be used as an adjunct treatment for major depressive disorder and has an off-label use to augment SSRI treatment for OCD.1,2 This drug comes in a tablet form that is meant to be ingested orally. Seroquel has two formulations: IR (immediate release) and XR (extended release).3

While the exact mechanism of action of Seroquel is not fully understood, its ability to meditate the symptoms of schizophrenia may derive from its ability to block certain dopamine and serotonin receptors.1

Seroquel is not widely considered a drug of abuse and is not a controlled substance; however, there have been reports of it being used nonmedically, especially by individuals in prison or psychiatric inpatient hospitals and those who have a history of polysubstance abuse.4

There are reports of misuse of the drug by crushing and snorting the tablets, injecting the medication, or combining it with cocaine and injecting the mixture.2

Used nonmedically, Seroquel has reportedly been referred to as:2,4

Many people wonder, what does Seroquel do? The pharmacologic effects that motivate the misuse of Seroquel are not well-understood. Some have hypothesized that it is abused for its sedating effects; however, other similar antipsychotics are more sedating, and only a very small percentage of user report experiencing drowsiness or sedation. While there must be some desirable effect it produces, researchers have yet to discover exactly what recreational users find appealing about the substance.4 Because this drug tends to be used in confined settings, it may be abused in large part because it is a medication that physicians will prescribe. Some inmates have even faked psychotic symptoms to retrieve a Seroquel prescription.2

Is Seroquel dangerous?  Seroquel, like most psychiatric medications, has several common side effects, which may include:1

Long-term use or abuse of Seroquel may lead to:1

Seroquel may be particularly dangerous for certain populations, including adolescents and elderly individuals. The FDA warns that elderly individuals suffering from dementia may be at an increased risk for a fatal reaction to Seroquel. This population should not be treated with Seroquel.6

The drug may increase depressive symptoms and raise the risk for suicidal thoughts and/or behaviors in children and young adults. It should therefore be used with caution in this population.7

Around 1% of people taking Seroquel may develop a life-threatening neuroleptic malignant syndrome, which could include symptoms of fever, sweating, confusion, and significant muscle stiffness.8

Abruptly stopping Seroquel may lead to a discontinuation syndrome, with withdrawal symptoms such as:1

A medical professional may prescribe a gradual reduction in dose over time and monitor symptom progression to minimize the discomfort associated with an unmanaged withdrawal.1 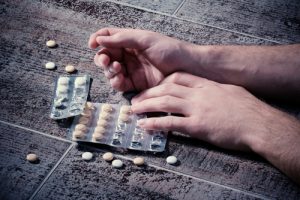 Signs that someone may be abusing Seroquel include:2,9,10,11

Polydrug abuse, or the abuse of more than one drug at a time, may be prevalent with individuals abusing Seroquel. For example, people abusing this drug may also be abusing cocaine and/or different types of prescription medications.

Often, when a person begins drug abuse treatment, a drug screen may be done during the initial assessment in order to identify any other substances the person is using regularly. This will help to ensure that all substance abuse issues are addressed and that no medications or supplements used during detox will have inadvertent and negative interactions with substances used by the person prior to intake.

Behavioral therapies are important during substance abuse treatment to help uncover the potential triggers or reasons for using a prescription drug like Seroquel for nonmedical purposes. Stressors can be identified and new coping mechanisms learned during group and individual therapy sessions.

Addiction treatment may take the form of an outpatient or inpatient program, and both formats may use similar treatment methods. Residential treatment usually means that individuals stay on site in a specialized facility in order to receive around-the-clock and comprehensive care. Inpatient care may be a preferred option for those who need consistent monitoring and support, such as those with severe addictions, people struggling with polysubstance abuse, and those with co-occurring disorders (see below).

With outpatient treatment models, clients return home to sleep at night, and they attend therapy and counseling sessions, as well as support group meetings, around their schedules, so they are able to maintain work and familial commitments if needed. Families and loved ones should decide on a treatment model that best fits their individual circumstances and work together with trained professionals to foster a long and healthy recovery.

Are you ready to reach out for help and start the addiction treatment process? If you or someone you love is struggling with addiction and are ready to take the first steps towards recovery, call us today at . Greenhouse Treatment Center, American Addiction Centers’ drug rehab center near Forth Worth and Dallas, Texas, is ready to help you get the treatment you need today.

What is Seroquel for? Seroquel is used primarily in the treatment of schizophrenia and bipolar disorder, two conditions that commonly coincide with substance abuse.12,13 When a person suffers from addiction as well as another mental health disorder, this is called “co-occurring disorders” or sometimes “dual diagnosis.”

According to a Substance Abuse and Mental Health Services Administration (SAMHSA) report from 2017, 8.2 million adults over 18 had both a substance use disorder (addiction) and a mental illness in 2016.14 Co-occurring disorders, such as mental illness and substance dependence, are therefore relatively common and may be treated with an integrated approach that places importance on addressing both conditions.