An average of 6 people die from alcohol poisoning in the U.S. each day according to the Centers for Disease Control and Prevention.1 Alcohol poisoning is caused by binge drinking, which results in the high consumption of large amounts of alcohol in a short period of time.

This leads to very high levels of alcohol in the body and can result in life-threatening respiratory depression—slow and ineffective breathing that results in slow heartbeat and lower body temperature. If any of these symptoms becomes too severe, a person may be in danger of permanent organ damage or death.1 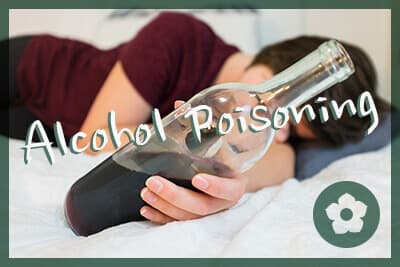 A person is at a high risk of alcohol poisoning after having multiple drinks in a short period of time and who continues to drink while displaying signs of intoxication: confusion and/or combative, flushed skin, and a general loss of coordination (e.g., slurring speech, unsteady gait).2

Life-threatening signs of alcohol poisoning include:3

Bystanders should call for emergency medical services if someone exhibits these symptoms. If the individual is unconscious and vomiting, it’s important not to leave them lying on their back. This can result in aspiration (i.e., breathing in) of the vomit into the lungs. If possible, the individual should be repositioned on their side while awaiting further medical attention.2

How Does It Happen?

According to the Centers for Disease Control and Prevention, one in six U.S. adults binge drinks about four times a month, consuming about seven drinks per binge. It’s twice as common for men to binge drink vs. women, and this difference is reflected in alcohol poisoning deaths with men making up 76% and women the other 24%.4

While binge drinking there are several individual factors that can impact how much a person can drink before they suffer from alcohol poisoning.2

Engaging in regular episodes of binge drinking or experiencing alcohol poisoning or overdose may be an indication of an alcohol use disorder AUD).

In 2018, nearly 14.4 million Americans over the age of 18 suffer from AUD, a chronic disease where an individual is unable to control use of alcohol, is preoccupied with it, or continues to use it even when it causes problems in their life.6

Although there’s no cure for AUD, there is treatment available that can help individuals manage the condition.