What Are the Signs and Symptoms of Alcohol Withdrawal?

Though the issues of both illegal and prescription drug abuse often dominate headlines, the reality of excessive alcohol consumption remains an enormous public health problem. Many people remain unaware of the health effects of problematic drinking, including the potential to develop physiological dependence and the risks of quitting without medical help. The signs and symptoms of alcohol withdrawal range from uncomfortable to life-threatening, and they should not be taken lightly.

What is Alcohol Withdrawal? 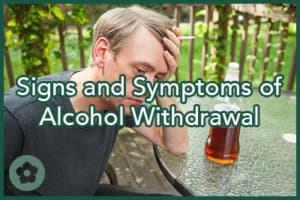 For people who drink heavily for sustained periods of time (anything from weeks to years), there are characteristic physical and mental/emotional changes that arise when attempts are made to cut down on the amount they drink or altogether quit drinking. Taken together, these adverse changes comprise the acute alcohol withdrawal syndrome1—the symptoms of which range from the inconvenient to the serious, depending on the nature of the drinking and the drinker’s individual physiological responses to abrupt abstinence.

Though the physiological details are quite complicated, at its most basic, the central nervous system adapts to the consistent presence of alcohol in heavy drinkers. Chronic, excessive drinking disrupts several neurochemical processes and the brain then works to restore balance via a phenomenon known as neuroadaptation.2 When the alcohol is taken away—either because supplies dry up or because the drinker tries to quit—the brain is thought to again become temporarily unbalanced, and the resulting over-excitatory brain signaling underlies many of the characteristic withdrawal symptoms.

Signs and Symptoms of Alcohol Withdrawal

In significantly physically dependent individuals, the first signs and symptoms of alcohol withdrawal often arrive around eight hours after the last drink3; however, the exact withdrawal timeline depends on a number of factors: for example, how heavy the drinking has been and for how long it has been going on, the person’s unique physiology, if other drugs have been used, and any previous withdrawal experiences. Symptoms often peak within 72 hours, however they sometimes persist for longer periods of time (e.g., weeks).3,4

Symptoms of acute alcohol withdrawal include:3,4

Increasingly severe symptoms may include:3,4,5

It is estimated that more than 5% of people who do not receive medical detox treatment will experience grand mal seizures—also known as generalized, tonic-clonic seizures—within the first few days of withdrawal (most within the first 48 hours, and less than 3 percent occurring 5 or more days after the last drink).6

In some instances of relatively severe withdrawal, people can develop a syndrome known as delirium tremens, or acute alcohol withdrawal delirium. When present, this complication typically arises 2 to 3 days after the last drink, and includes symptoms such as visual, tactile, and/or auditory hallucinations; marked confusion; and diminished level of consciousness in addition to severe autonomic hyperactivity (e.g., fever, sweating, tachycardia, anxiety, agitation, etc.).5

Other potential medical complications include:3,6,7

Medications to Assist with Alcohol Withdrawal

For many who struggle with alcohol use disorders, navigating the period of alcohol withdrawal is a necessary early part of recovery, but it is not without its risks. Fortunately, there are several medications that can be administered as part of a supervised medical detox to help individuals through this often-unpleasant and potentially stressful period, and to minimize the risks of certain complications, such as seizures.

Another benzodiazepine that may be considered for alcohol withdrawal is oxazepam. Oxazepam has a relatively slow absorption rate and a shorter half-life than some other first-line treatments, but is sometimes the favored agent used to manage withdrawal in people with hepatic insufficiency or liver failure.7

Though benzodiazepines remain the primary line of alcohol withdrawal treatment in the United States, other medications may be used in certain instances for symptomatic management. For example, anticonvulsant medications such as carbamazepine and valproic acid have shown efficacy in managing mild to moderate symptoms.7

The medications used to treat the symptoms of alcohol withdrawal will help a patient through the physical effects of abstinence in early recovery; important goals of successful withdrawal management include keeping an individual as safe and comfortable as possible and facilitating a closer focus on recovery work.7,8 Successfully navigating the detox and withdrawal management period is an important component of recovery, but it is vital that the patient follows this up with additional therapeutic interventions (e.g., behavioral therapies) to more closely address the psychosocial aspects of compulsive alcohol use and to better learn how to cope with any stressors, triggers, and cravings for alcohol.

Comprehensive rehabilitation efforts are often comprised of several components, such as medication-assisted treatment, ample one-on-one and group therapy sessions, family therapy, participation with peer support groups (such as Alcoholics Anonymous), and the development of a solid plan for aftercare prior to completion of the formal treatment program.

Withdrawing from alcohol can be a very difficult and stressful process, but it is only the first part of a long undertaking. With the right care, work, and medications, people who struggled with problematic drinking or an unhealthy dependence on alcohol will be able to lead long, rich, and fulfilling lives.

Don’t let your addiction reach rock bottom. If you or someone you love is struggling with the devastating side effects of addiction and are unsure of where to turn, call us today at . Greenhouse Treatment Center, American Addiction Centers’ alcohol detox center in Texas, is ready to help you get the treatment you need today.

alcoholwithdrawal
Prefer getting help via text?
We're available 24/7 via text message. Signup below for access to our team when its convenient for you!
and many more...
✕
Instantly Check Your Insurance Coverage
Your information is safe & secure
At Greenhouse, we accept most types of private (non-government) insurance and offer a variety of payment options.
You can quickly and privately check your insurance benefits to see if you're covered for addiction treatment services. We’ll be able to tell you if your provider is in network with Greenhouse Treatment Center and all American Addiction Centers locations.
This means your treatment may be FREE1 depending on your policy, copay, and deductible.
Get the Info & Help You NeedWe're open across the US. Learn about your options.