Hallucinogen persisting perception disorder (HPPD) is a condition that causes an individual to re-experience sensory disturbances that can mimic those brought on during prior drug use.1,2 HPPD occurs among users of hallucinogenic recreational drugs, most commonly lysergic acid diethylamide (LSD) but may also be triggered by other substances, such as alcohol, marijuana, ecstasy/molly (MDMA) and phencyclidine (PCP).1-4

Sometimes referred to as an “acid flashback,” in order to be diagnosed officially with HPPD, according to the American Psychological Association’s Diagnostic and Statistical Manual of Mental Disorders, 5th edition (DSM-5), the disturbances must be prominent or chronic enough that they cause distress or functional impairment.1 In persons with HPPD, flashbacks may persist for weeks, months, or even years.1

Hallucinogens are drugs that alter a user’s perception of the world around them.2,3 While intoxicated, people often experience intense emotional swings and report seeing images, hearing sounds, and feeling sensations that seem real but aren’t.3

Some hallucinogens occur naturally, and many of them have been and some are still used today in religious ceremonies.2 LSD, a synthetic hallucinogen was popular in the 1950s and 1960s as an experimental psychedelic that was used both recreationally and in psychiatric research.2

According to the 2018 National Survey on Drug Use and Health, more than 15% of people ages 12 and older had used a hallucinogen at least once in their lifetime.5 About 2/3 of those people reported using LSD.5

Prevalence and Symptoms of HPPD 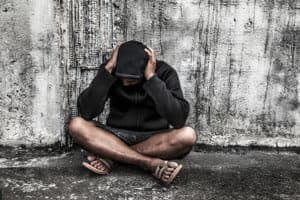 Hallucinogen persisting perception disorder is uncommon. Even among the population of hallucinogenic drug users, the prevalence estimate is approximately 4.2%.1

There isn’t much known about HPPD given the limited amount of research done on the rare condition.1,4 The risk of experiencing HPPD does not appear to be linked to the frequency of exposure to hallucinogens or other drugs.1 It is more often diagnosed in individuals with a previous history of mental problems or substance abuse, but it can occur in people who have taken a hallucinogenic drug only once.4

Symptoms of HPPD appear when a person is no longer intoxicated and include:1,2,4

People with HPPD are aware that what they are seeing is not real.1,2,8 Symptoms may be mild and benign at times, and the afflicted individual might even enjoy the “free trip,” as it resembles a psychedelic experience without ingesting a hallucinogenic drug.4 It may also develop into a condition that’s long-term, pervasive and which may be slow or impossible to reverse.4

A person diagnosed with HPPD experiences social or occupational impairment as a result of the recurring hallucinations.1 Case reports suggest impairments can get so bad that individuals may also meet the criteria for depression, anxiety or panic disorders, or even schizophrenia.6-8

Sometimes, despite past drug use, symptoms of HPPD are caused by a medical condition or may be better explained by another mental disorder, such as schizophrenia.1,6-8 Doctors may rule out these possibilities before settling on HPPD as the cause of hallucinations.1,6-8

Symptoms of HPPD may simply dissipate on their own over time. For others, it is a long-lasting and seemingly irreversible condition.1,2,6-8

There’s no specific course of treatment for those experiencing HPPD.2,4,7 Abstinence from hallucinogenic substances is critical, and a variety of pharmacological approaches have been successful in the cases documented in peer-reviewed medical literature.2,7 Drugs used successfully in these cases of HPPD have included benzodiazepines, selective serotonin reuptake inhibitors (SSRIs), anticonvulsants and neuroleptics.2,7 In some instances, however, these and other drugs—particularly SSRIs and antipsychotics—have also been documented as worsening symptoms.2,6

Behavioral therapy, either one-on-one or group therapy, may also be helpful, especially if HPPD has been a source of marked anxiety and if stress exacerbates symptoms and results in social isolation.7