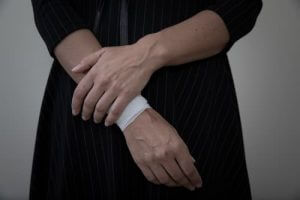 Self-harm, also known as non-suicidal self-injury, is the act of hurting oneself on purpose (but does not include normal piercing or tattooing).1-3 According to the U.S. Department of Health and Human Services about 1 in 100 people hurts themselves.1

Common methods of self-harm include cutting (not on the wrist), skin carving, burning, biting, scratching, hitting, head banging, and interfering with wound healing.2

Non-suicidal self-injury usually begins in the early teen years (12-14 years) and peaks at 20-29 years of age.3,4 It’s estimated that 7% to 14% of adolescents deliberately injure themselves at least once.2 About 4% of adults engage in self-harm.2

Self-harm is usually a maladaptive coping mechanism arising from adverse childhood experiences or high levels of subjective psychological distress.2 Non-suicidal self-injury behaviors are employed to relieve intense distressing feelings such as sadness or guilt. The sharp physical pain of self-harm helps to distract from unbearable feelings.2 Self-injury may also occur when a person feels they need to punish themselves or as a vehicle to gain attention so others can see their distress.2

Risk factors for self-injury during adolescence include bullying, negative social interactions, and emotional childhood abuse.5 Childhood sexual and physical abuse may also be a risk factor, although the evidence isn’t as clear.5

Suicide is the second leading cause of death among adolescents.6 Non-suicidal self-harm is not usually done in a suicide attempt, but it may in fact be a predictor of suicide attempts in adolescents and increase the risk for suicidal behavior.6,7

Suicidal thoughts and ideation that predate non-suicidal self-harm may increase the risk in suicidal behavior in teens who are thinking about suicide.4,6

For adolescents, the transition from thoughts of self-injury and behavior to suicide attempts is relatively fast—on average only 1–2 years.4

Therefore, the first 6 to 12 months after the onset of suicidal thinking or engaging in non-suicidal self-harm is a critical period for intervention and prevention of suicidal behavior.4 So, even though death is not the intent of non-suicidal self-injury, it’s important for parents and others to take it seriously and perform ongoing assessment of, and intervention for, suicidal behavior.6

Although non-suicidal self-injury may a symptom of those with developmental disabilities, eating disorders, borderline personality disorder, post-traumatic stress disorder or other psychiatric conditions,2,8 it’s estimated that nearly half of adolescents and young adults who engage in self-harm appears to be in the absence of these conditions.8

Substance abuse among those who self-harm is not uncommon.9,10 One study of adolescents who engage in non-suicidal self-injury found that 59.6% met the clinical criteria for a substance use disorder.9 Major depressive disorder and anxiety disorders are even more common than alcohol or drug use in someone who engages in regular self-harm.10

It’s important to keep in mind that although substance use disorders commonly occur with other mental disorders, it doesn’t necessarily mean that one mental illness causes the other.11

Non-suicidal self-harm early in life, however, has been found to have a strong association with substance misuse, self-harm as well as other mental health disorders in the future.12