Suboxone is becoming the maintenance drug of choice for facilities across the country because of the side effects of methadone. Although methadone has proven to be an effective treatment, it has the potential to become addictive as well, possibly even more addictive than heroin. Though German scientists Max Bockmuhl and Gustav Ehrhart of the IG Farben Company designed methadone in 1937 to be a less addictive substitute for morphine and heroin, those who have used methadone recreationally, for pain relief, or in a drug maintenance program often state otherwise regarding its addictive potential.

Methadone is a synthetic opioid drug used most commonly to treat opioid addiction. In the 1960s, it became a primary treatment for heroin addiction in the US. The National Institutes of Health states it has little potential for dependency when used as directed since it causes very little euphoric effect. It works by altering how the brain and nervous system react to pain. As a maintenance drug, it blocks the euphoric effects of opiates like heroin, codeine, and morphine. Additionally, it has the ability to stop the euphoric effects of synthetics like hydrocodone and oxycodone. It reduces the symptoms of opiate withdrawal as well.

Methadone is long-lasting and can remain active for up to 24 hours, but the analgesic effects of the drug only last 4-6 hours. It has a half-life of 8-59 hours, states the U.S. Food and Drug Administration.

When crushed and snorted or injected, it has little potential to cause euphoria; however, someone looking to feel a “rush” from it may take it in large quantities to try to achieve a high. This is why methadone abuse frequently leads to death. The Centers for Disease Control and Prevention released statistics in 2012 that denote methadone is the cause for 33 percent of opiate-related deaths.

As an opioid, methadone can lead to physical dependence. The associated withdrawal symptoms are likely to be more intense for those who have developed more significant levels of dependence. In other words, the length of use and the dosage level determine the severity of the symptoms. Individuals who become addicted to the drug report similar withdrawal symptoms as other opiates.

Addiction to methadone is more common when people abuse the drug as opposed to those who use the drug as prescribed; thus, it is one reason why physicians stress the importance of taking the drug via the route prescribed and at the recommended dosage. That’s why methadone is given at a designated location at the prescribed dosage and usually not given to the client to take home.

A person taking methadone will develop a tolerance for the drug, which means the person will require more to feel the same effect. The more a person takes, the more likely it is for the person to develop an addiction. Even those who take the drug as prescribed by a methadone clinic may still become addicted to the substance.

What Should a Person Expect When Going through Withdrawal?

When a person first starts going through methadone withdrawal, it can take more than a day for symptoms to start, usually within about 30 hours after the last use. On average, the withdrawal process lasts for a few weeks or longer.

At the beginning of methadone withdrawal, a person feels tired and possibly restless. The person may have difficulty sleeping or feel anxious. Frequent yawning begins after about 30 hours as well, as do sweating, tearing, and a runny rose. 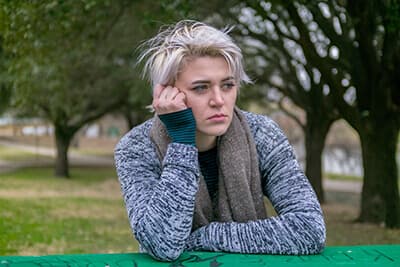 Initially, withdrawal feels like the flu; however, the severe symptoms of the flu only last 2-3 days on average while the flulike symptoms of methadone withdrawal last for several days. At this point, the person may begin to have muscle aches and pains, cramps, and goosebumps. Nausea, diarrhea, and vomiting begin at this time. Certain symptoms of psychological withdrawal like depression begin at around this time too. The individual will begin to have cravings for the drug. These symptoms tend to peak about 72 hours after the person’s last exposure and will continue to decrease with time.

If a person purchases methadone on the streets to try to alleviate the symptoms of withdrawal, it can lead to deadly consequences. Since dosages vary from person to person, purchasing it illegally can lead to an overdose. Because of how the drug works and how a person processes it, it’s possible to overdose and not experience the consequences until several hours later. Only a medical professional is able to determine the correct dose for a person based on several factors, such as the level of previous drug use and the weight of the individual. It’s also dangerous to self-prescribe another drug, such as another opiate or benzodiazepine, to try to combat the symptoms.

What Happens during Supervised Methadone Withdrawal and Treatment?

A tapered withdrawal process can take several months before a person is able to go without methadone. A medical professional will prescribe a decreased dose of methadone that the person will have to take for a set amount of time. Then, the medical professional will prescribe a lesser dose for a set number of days. This continues until the person is no longer taking the medication. During the taper, the person may experience some symptoms of withdrawal, but they won’t be as serious as if the person quit cold turkey, and in some instances, dosages will be adjusted if withdrawal symptoms become uncomfortable.

Certain medications can help to ease the withdrawal process, including buprenorphine and naloxone. Buprenorphine acts on the same receptors in the brain as heroin and morphine, but it doesn’t give individuals a euphoric feeling. Sometimes, it’s combined with naloxone – the drug used to block the effects of opiates when a person overdoses – to create a combination drug under the brand names Suboxone or Zubsolv. The naloxone binds with the opioid receptors to prevent and block the effects of other opiates, serving as a deterrent to abuse the drug.

Clonidine, also known by the brand name Catapres, is a central-acting alpha-agonist hypotensive agent. Although it’s primarily used to treat hypertension, it’s been proven beneficial to those undergoing detoxification from methadone. Clonidine reduces anxiety that is often caused by withdrawal. According to the National Center for Biotechnology Information, a division of the National Institutes of Health, the use of clonidine for opiate withdrawal may help speed up the process, and sometimes, withdrawal can take as little as 14 days rather than several months. Those who take it are more likely to eliminate methadone use than those who don’t use a medication to combat withdrawal symptoms. Clonidine may be given with other medications, such as Suboxone.

Emotional support is a vital element of a person’s overall recovery. Because not everyone has a strong support system at home, especially if a person’s loved ones don’t understand addiction, it is beneficial to seek out a support group made up of others going through methadone withdrawal. While detox is important, it is not addiction treatment on its own; it must be followed by a comprehensive treatment program to ensure recovery.