Methadone is a synthetic opioid agonist drug widely used for detoxification and withdrawal management in cases of opioid addiction as well as for the maintenance treatment of opioid addiction.1 As a full opioid agonist, the drug binds to and activates opioid receptors in the brain similarly to other opioids for which people may be seeking rehabilitation treatment, including heroin and prescription painkillers like OxyContin.2

Unlike opioids misused for nonmedical reasons, at therapeutic doses methadone helps people recovering from opioid addiction by reducing cravings and withdrawal symptoms while, at the same time, blocking the euphoric effects of any misused opioids through a phenomenon known as agonist blockade.3 Additionally, in opioid-dependent individuals undergoing methadone treatment, the drug is not associated with any pronounced euphoria of its own.2

As part of a medication-assisted treatment regimen for opioid dependence, methadone is dispensed through specialized opioid treatment programs (OTPs).12 It has been successfully used as maintenance therapy for people with narcotic addiction for more than 40 years.2 However, despite its therapeutic utility, as a full opioid agonist, methadone is capable of eliciting some degree of a reinforcing euphoria4—especially when misused in doses that exceed prescribed guidelines. People who misuse the drug may be at particular risk of developing significant physical dependence and experience an unpleasant withdrawal syndrome should the drug suddenly become unavailable, or if use slows. 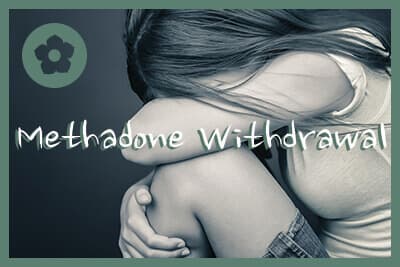 How Is Methadone Used?

For use in various medication-assisted treatment scenarios (e.g., maintenance or detoxification) for opioid use disorder, methadone is dispensed and administered in oral form. Dispersible tablets, known as Diskets, are one such oral formulation used for these purposes.1

As an opioid painkiller, methadone may also be used to treat patients struggling with chronic pain states such as cancer pain or neuropathic pain.5 As a relatively inexpensive generic drug (relative to other extended-release painkiller options), the long-acting properties of methadone make it a valuable treatment option for low-income or elderly patients who need help with chronic pain conditions since, with consistent treatment, methadone analgesia may extend to 12 hours with repeated dosing.5

Used under medical supervision, methadone has long been a useful analgesic for long-term pain management as well as opioid maintenance therapy, but it has also become a target for abuse and subsequent addiction development. People who take higher than prescribed doses, more frequent doses, or combine methadone with other opioids or central nervous system depressants like alcohol or benzodiazepines—whether inadvertently or intentionally, such as to enhance the potential euphoria associated with the other drugs—place themselves at risk of potentially dangerous side effects such as over-sedation and respiratory depression, coma, and death.4,5,7 The Centers for Disease Control (CDC) reported that methadone was involved in more than 3000 overdose deaths in 2017—roughly one fifth the number of heroin overdose deaths that year.6

Other significant associated risks of methadone use include:1,7,8

Methadone is a relatively long-acting opioid, with single therapeutic maintenance doses lasting as long as 24 to 36 hours depending on specific characteristics of the person using it (e.g., body weight, the magnitude of tolerance).9,10 In part because of its relatively long half-life and longer-lasting pharmacologic activity, the methadone withdrawal syndrome, although qualitatively similar to that of other opioid agonist drugs, may differ somewhat in terms of exhibiting a slower onset, more prolonged, and potentially less severe course than that associated with some other opioid drugs.1

Abrupt discontinuation of methadone may result in the following characteristic withdrawal effects:1,11

As the plasma half-life of methadone is relatively long (13-47 hours compared with 3-4 hours for a shorter-acting opioid like morphine),14 withdrawal onset and the total duration of withdrawal is likely to also be more drawn out (though physiological variability between individuals will also result in some differences in the particular time course experienced).15 For any type of opioid withdrawal, however, in the absence of medical oversight as well as some form of opioid stabilization or maintenance therapy, withdrawal symptoms can be intense and challenging to deal with, which can increase the risk of relapse.

The timelines for withdrawal are somewhat variable between different opioid drugs; and, as mentioned, even when looking at just methadone, the precise character and timing of withdrawal is going to differ from one person to the next. However, in general, many instances of opioid withdrawal can be conceptualized as progressing through two phases.16

The symptoms of opioid withdrawal, while not commonly life-threatening, present persistent challenges to relapse prevention and other recovery efforts. For these reasons, people often seek the help of professional detoxification and longer-term maintenance therapy when attempts are made to discontinue methadone use.

Though many people remain on methadone maintenance therapy for years, if not indefinitely, others may compulsively misuse the drug and at some point seek help to altogether quit using it. And, though methadone is itself a medication used during detoxification and long-term medically-assisted treatment efforts, the same principles apply to helping people gradually discontinue use of the drug, should the decision be made to do so. Though detoxification from methadone is challenging, with the help of medical supervision and support, a slow tapering off of methadone—on the order of many weeks to several months—in conjunction with behavioral therapy and other psychosocial interventions can help improve the outlook for continued abstinence and recovery.9,15

Treatment teams may also sometimes attempt to switch the individual to a different maintenance medication, such as buprenorphine, as it may be associated with less pronounced health risks (such as respiratory depression) and adds some flexibility in terms of the availability and dispensing of the treatment drug. Care will be taken in making such a switch, as people dependent on higher doses of methadone may experience significant withdrawal discomfort in the setting of an abrupt substitution.9