Nutritional counseling and education, nutrient replacement, and rehydration are key components of recovery from substance abuse.1–3 Heavy alcohol and/or drug use depletes the body of crucial vitamins, minerals, and energy stores that are necessary for a healthy life.4

One of the most important goals during medical detoxification and subsequent treatment for a substance use disorder is restoring an individual’s healthy eating habits through nutritional counseling, education and meal planning.5

Nutrition education is an essential component of substance abuse treatment programs and have been shown to enhance treatment outcomes.2 To reinforce this, some rehab centers offer meals prepared by trained chefs, as well as counseling by nutritionists or registered dietitians who specialize in nutritional support in recovery.

As part of the intake process, the treatment team should assess incoming clients’ nutritional status.5 Most heavy substance abusers have some form of nutritional deficiency. Malnutrition associated with substance abuse can interfere with or prolong the detoxification process.6 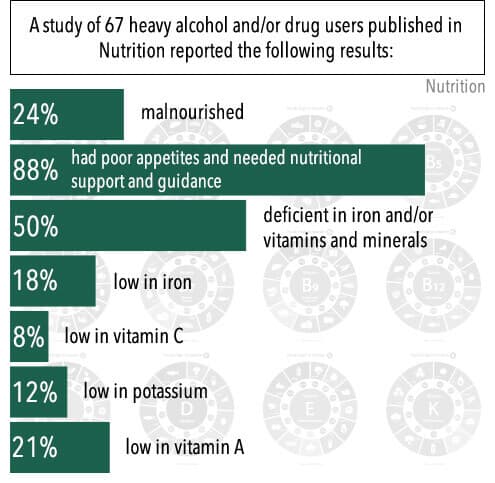 Substance abuse depletes the body of the nutrients required to produce energy, protect the immune system, support healthy brain and nerve function, and heal from the effects of environmental damage.7 As a result, people who abuse alcohol or drugs may be at risk of developing chronic illness, skin problems, foggy thinking, and unwanted weight loss.7 A study of 67 heavy alcohol and/or drug users reported the following results:8

Many heavy drinkers are low in B vitamins — especially B6, B12, thiamine and folate—which support metabolism, energy production, and brain and nerve function.7 A shortage of these vitamins can cause depression, anxiety, restlessness, and confusion.

For heavy drug and alcohol users, food is often treated as an inconvenience rather than a vital source of life and health. The substance abuser often has inadequate dietary intake leading to malnutrition.7

Sweets, junk foods, and fast foods—and a low intake of fruits and vegetables—are often the easiest and cheapest options, and these items tend to be appealing.7,9 In fact, the heaviest drug users are often the most malnourished.7

One study of drug-addicted individuals found that 61% of the study participants displayed a strong preference for sugary foods, and that approximately 30% of their caloric intake came from added sugar.8

Sugar may even simulate some of the sensations produced by drugs or alcohol. Consuming sugar results in increased levels of dopamine, the neurotransmitter commonly associated with feelings of reward and plays a role in the development of addiction.10 Eating large quantities of sugar can produce responses in the brain that are similar to opioid addiction.10

A high-sugar diet can also contribute to the depletion of vitamins, elevated blood sugar levels, high cholesterol, and an increased risk of diabetes and heart disease.11

The specific effects on an individual’s nutritional status may depend on the drug or drugs that they have been using. Each category of substances affects the body in different ways:

In general, individuals dependent on alcohol eat poorly and do not consume a balanced diet. Alcoholics often eat less than the amounts of food necessary to provide sufficient carbohydrates, protein, fat, vitamins A and C, the B vitamins, and minerals such as calcium and iron.12 Excessive alcohol consumption may also interfere with a person’s ability to absorb and use the nutrients that they do consume.13

Alcohol depletes vitamins B1 (thiamine), B2 (riboflavin), B6 (pyridoxine) as well as folic acid and the deficiency correlates with the amount of alcohol consumed and with the corresponding decrease in vitamin intake.12 Brain damage can result from a lack of thiamine, which may lead to Wernicke-Korsakoff syndrome.1,12

Patients with alcohol-related liver disease (i.e., cirrhosis) are also frequently deficient in vitamin A.12 Vitamin A deficiency can result in eye disorders and impairs the ability of the eye to adjust to dark conditions. It may also promote fibrosis (i.e., formation of scar tissue in the liver).12

Alcohol’s interference with the metabolism of fatty acids can also cause “alcoholic fatty liver,” where dietary fat is deposited in the liver.12,13 Decreasing the amount of fat in the diet can reduce the severity of the condition.7

Central nervous system stimulants, such as cocaine, crack, meth, and amphetamines, as well as hallucinogenic drugs like ecstasy, accelerate the activities of the brain and nerves and increase the body’s metabolic rate, which generally leads to decreased appetite and weight loss.14 When stopping use of stimulants, dehydration and electrolyte imbalances may occur.14 Calcium and vitamin D may not be fully absorbed. Laboratory tests for proteins, vitamins, iron and other electrolytes are recommended to determine the extent of liver function as well as guide nutritional supplementation.14 Methamphetamine users typically have high rates of dental disease, including decayed, missing and filled teeth which further complicates nutritional intake.14,15

Opioids are central nervous system depressants, which slow down the activities of all the body’s systems, including digestion. The effects of opioids on the gastrointestinal tract can cause chronic constipation, delayed digestion, and malabsorption of nutrients.17

In detox, individuals withdrawing from opiates may experience nausea, vomiting, diarrhea and anorexia, or a lack of desire to eat. Diarrhea and vomiting can lead to potentially dangerous fluid and electrolyte imbalances, namely a deficiency of potassium.14

Marijuana, or cannabis, has become the most commonly used drug in the U.S., after alcohol.18 Tetrahydrocannabinol (THC), one of the active chemical compounds in marijuana, can act as an appetite stimulant.14 This increase in appetite can cause unhealthy weight gain in long-term users, who might need a restricted diet and an exercise program to help them achieve a healthy weight.14

Goals for Nutrition in Recovery 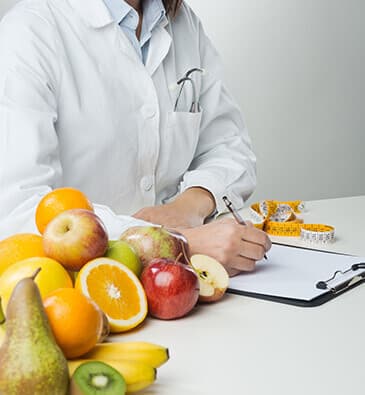 Many people who enter rehab have neglected their diet for months or even years. The key goals of nutritional support in recovery include:14

Maintaining healthy eating habits learned during rehab and maintaining a balanced program of eating, rest, and exercise will help prevent relapse and help to keep an individual on their pathway to recovery and living a healthy life.