Hydrocodone is an opioid drug once commonly prescribed in combination formulations that include acetaminophen, such as the brand name products Vicodin, Norco, and Lortab.

Hydrocodone is also available in non-combination products, including the extended-release formulation marketed as Zohydro ER.1

Opioids like hydrocodone work by attaching to and activating certain opioid receptors throughout the brain. This interaction serves to alter the perception of pain, which has much therapeutic value, but is also associated with a dose-dependent,  rewarding euphoria that may play a role in continued and, ultimately, compulsive misuse.

The National Institute on Drug Abuse (NIDA) has warned that, because they act on the same brain systems as drugs like morphine and heroin, prescription opioids like hydrocodone are inherently addictive when misused nonmedically.  This addiction liability and the dangers of use can become even more pronounced when the drugs are intentionally misused to intensify the euphoric high—such as by crushing the pills to snort or inject, taking larger-than-prescribed doses, or combining the drug with alcohol or other substances.3

The past decade witnessed a trend of people switching from prescription painkiller misuse to heroin in some communities. Such a frightening turn of events could be the end result of several factors—including individual response to increased tolerance to the effects of a drug like hydrocodone, as well as the phenomenon of legitimate prescriptions becoming harder to come by in a climate of increased clinician scrutiny coupled with the relatively lower cost and ease of access for certain street drugs like heroin.3

What Are the Signs of Hydrocodone Abuse?

Mayo Clinic reports that compulsive misuse of hydrocodone and other prescription drugs may be associated with the following behaviors:4

What Are the Side Effects of Hydrocodone?

Hydrocodone use is associated with several physical side effects, including:1,4,5

At high enough doses hydrocodone can result in more dangerous side effects. Potentially life-threatening effects of this drug include slow, irregular breathing and chest tightness. A fatal hydrocodone overdose may be more likely should the drug be used with certain other substances, including additional opioids, alcohol, or other central nervous system depressant medications. The CDC has estimated that roughly 130 people die from an opioid overdose in the U.S. every day.6

The symptoms of an opioid overdose may include:1,7

In addition to overdose and other health risks, another significant consequence of consistent, nonmedical hydrocodone misuse is the development of physical dependence. Over time, the body adjusts to a persistent presence of hydrocodone, and comes to “need” it to feel and function relatively normally. At the point that dependence develops, suddenly stopping or decreasing the drug can lead to acute opioid withdrawal—and a range of characteristically unpleasant symptoms.4

Dependence and withdrawal are common components of many types of substance addiction. In fact, withdrawal is one of several criteria that is used to make a diagnosis of a substance use disorder. In the case of hydrocodone, once an individual develops physiological dependence to the drug, stopping or lessening use of the drug is likely to lead to some degree of withdrawal.

For many who struggle with compulsive hydrocodone use or other opioid use disorder, a period of medical detox and withdrawal management is often sought in early recovery. NIDA indicates that detoxification—the process by which the body rids itself of a substance like hydrocodone—is a common starting point of most professional treatment programs.9 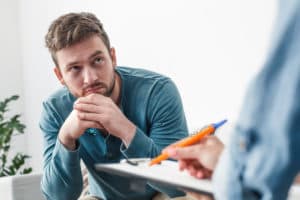 Successful detoxification and withdrawal management for hydrocodone addiction is only part of a comprehensive approach to substance use treatment. Though keeping an opioid-dependent individual safe and comfortable throughout the withdrawal phase is a vital component of early treatment, it alone is seldom sufficient intervention to help people achieve lasting abstinence.9

Further treatment, including behavioral therapy, and often medications, are necessary for many people to experience sustained recovery from substance abuse.

How to Treat Hydrocodone Addiction

In allowing a person to more closely focus their attention on their recovery efforts, detox does serve as a natural stepping stone to additional rehabilitation efforts. Such efforts commonly consist of a mix of behavioral therapeutic approaches (often in addition to ongoing medication treatment), administered throughout several, daily individual and group counseling sessions. Such therapy may be provided in either an inpatient or outpatient setting, dependent on individual requirements.

Commonly utilized behavioral interventions for addiction treatment include the following:12,13

What Medications Can Help with Hydrocodone Abuse?

Various medications are approved for the treatment of opioid use disorders, including the opioid agonist medications methadone and buprenorphine, and the opioid antagonist naltrexone.10,11

Methadone and buprenorphine are synthetic opioid agonists that, when used as treatment drugs, can reduce cravings and otherwise minimize the negative impact of opioid withdrawal without eliciting the pronounced euphoria of the previously misused drug—in this case, hydrocodone.11

Methadone has been used to treat addiction for several decades, but it is itself a controlled substance; its administration as a treatment drug is carefully supervised to prevent diversion and nonmedical misuse—methadone can only be dispensed through specially certified treatment centers.10

Buprenorphine has been in use for treating opioid use disorders since 2002. Buprenorphine can be prescribed and dispensed by certified physicians and other qualified practitioners, eliminating the need for a visit to a specialized clinic, making it relatively more accessible than methadone for people who would benefit from this type of treatment.10

In addition to the handful of medications with specific FDA-approval to treat opioid use disorders, adjunctive medications for symptomatic relief (for withdrawal effects such as nausea, vomiting, and diarrhea) may also be used as part of a medical detox protocol to keep those in recovery as comfortable as possible.11

Getting Help with Greenhouse

Greenhouse Treatment Center has the experienced and licensed medical staff to help patients undergo treatment specific to their needs. If you find that you or your loved one are struggling with the misuse of hydrocodone, options are available.

Don’t let your addiction reach rock bottom. If you or someone you love is struggling with the devastating side effects of addiction and are unsure of where to turn, call us today at . Greenhouse Treatment Center, American Addiction Centers’ drug abuse rehab center in Texas, is ready to help you get the treatment you need today.